Cycles of transport: Trying to get there from here

Going around in circles of history and transportation

I recall thinking, at least 20 years ago, that the embrace of the Internet, and all things tech-related was a modern equivalent of the gold rush. You could see it in behavior of capital markets, in consumer activity, in additional development.

We truly are a slow-moving society that keeps doing things over and over again in cycles of history.

Railroads played a key role in the development of the United States — industry in the North East, settlement of the West. The system was largely built by 1910, but then trucks arrived to eat away the freight traffic, and automobiles (and later airplanes) to devour the passenger traffic. After 1940, the use of diesel electric locomotives made for much more efficient operations that needed fewer workers on the road and in repair shops.

“Most business historians have assumed that the transcontinental railroads would never have been built without government subsidies. The free market would have failed to provide the adequate capital, or so the theory asserts. The evidence for this theory is that the Union Pacific and Central Pacific railroads, which were completed in the years after the War Between the States, received per-mile subsidies from the federal government in the form of low-interest loans as well as massive land grants. But there need not be cause and effect here: the subsidies were not needed to cause the transcontinental railroads to be built. We know this because, just as many roads and canals were privately financed in the early nineteenth century, a market entrepreneur built his own transcontinental railroad,” writes Thomas J. DiLorenzo, in “How Capitalism Saved America: The Untold History of Our Country, From the Pilgrims to the Present.”

He cites for example, James J. Hill built the Great Northern Railroad "without any government aid, even the right of way, through hundreds of miles of public lands, being paid for in cash," as Hill himself said.

But "travel is never a matter of money, but of courage,” according to Paulo Coelho. And modern transportation is cycling up to front in this country, and particularly here in Colorado.

“Arrivo will first build a test site by the E-470 toll road, running past the main airport. The company could even take over a lane of traffic in either direction instead of building a whole new path. The company plans to add 200 employees to a nearby technology center by 2020, with the end goal of having a system running in the next five years,” wrote Mike Brown, a few days ago in “Inverse.” It is sort of like a hyperloop, proposed by Tesla leader Elon Musk in 2013.

“Well, not exactly a hyperloop. A hyperloop-inspired system,” notes Alex Davies of “Wired.”

“It’s a meaningful distinction,” says Brogan BamBrogan (yup, his legal name), founder and CEO of Arrivo, which today announced a deal with the Colorado Department of Transportation to develop such a network throughout the Denver metropolitan region that looks an awful lot like the maglev train systems now running in Japan and China. When Elon Musk first publicized this idea for high-speed tube travel in a 2013 white paper, he described people- or cargo-filled pods levitating above a track inside near-vacuum tubes. This elimination of nearly all friction and drag would mean that the pods could hit near-supersonic speeds with relatively little energy expenditure. Since then, hundreds of people and a handful of companies have been trying to realize hyperloop. They have mixed and matched Musk's ingredients, trying to find a recipe that delivers the right blend of cost, speed, and infrastructural feasibility,” says “Wired” Alex Davies.

“Colorado drivers may be the first to escape traffic thanks to a new partnership between state officials and a Los Angeles-based hyperloop tech company. Arrivo founder Brogan BamBrogan joined Colorado transportation officials in Denver Tuesday to announce a partnership to create a network of roadside tubes at the congested heart of the city that promises to whisk drivers and their cars to their destinations at speeds of up to 200 mph. The public-private players include Arrivo, the Colorado Department of Transportation and E-470 Public Highway Authority, which operates a 75-mile, user-financed toll road running along the eastern perimeter of the city. The Arrivo test site will be near E-470 and groundbreaking is slated for early 2018. BamBrogan says Arrivo's first commercial system could be ready in 2021 depending on funding, regulatory and public-perception hurdles,” says Marco della Cava, of USA TODAY.

In the meantime, the Colorado Department of Transportation is still working with Hyperloop One as announced in September.

“Hyperloop One, the only company in the world that has built a full-scale Hyperloop system, today announced Colorado as one of the 10 winners of its Hyperloop One Global Challenge to identify the strongest new Hyperloop routes in the world. Following a close assessment of the proposals by a panel of experts in infrastructure, technology and transportation, ten teams from five countries were chosen from among hundreds of applicants. Hyperloop One will commit meaningful business and engineering resources and work closely with each of the winning teams/routes to determine their commercial viability. Additionally, as a direct result of the Global Challenge, Hyperloop One and the Colorado Department of Transportation (CDOT), with support from AECOM, will enter a public private partnership to begin a feasibility study in Colorado that considers a Front Range route from Cheyenne to Pueblo,” said release at the time.

"We are excited​ to partner with Hyperloop One in exploring the next step of feasibility of this innovative technology, potentially transforming how Colorado moves," said Shailen Bhatt, Executive Director of the Colorado Department of Transportation. "The Hyperloop technology could directly align with our goals of improving mobility and safety in Colorado, and we have been encouraged by the continued progress the technology is taking," said the Sept. CDOT release.

Also, interestingly enough, CDOT Executive Director Shailen Bhatt, who touts among his top accomplishments for the state system as being selected and launching as one of 10 global finalists and moving forward with a first-of-its-kind feasibility study to build Hyperloop, a new rapid speed travel infrastructure. Bhatt also focused on deploying transportation technology, creating the RoadX program and making Colorado a national innovation leader and by teaming with the private sector to shape our transportation future.

Bhatt will leave his position in December to become President & Chief Executive Officer at the Intelligent Transportation Society of America. 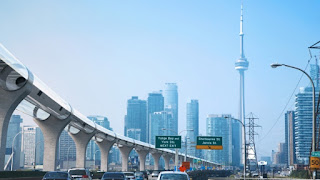 Illustrations: Renderings of hyperloop system.
Posted by ___ Restless Native at 5:42 AM