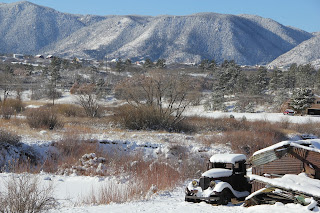 The woman kept goats, chickens, cats, dogs and other animals and did not keep it, or herself very clean

There is no way that either Pink Floyd, or Black Sabbath, were wandering around the Pikes Peak area in the '60s and '70s, but if they were, they would have found a "Dirty Woman." That would be the 1860s and 1870s, of course, and this "Dirty Woman" is not the kind they write gritty, dark-sided rock anthems about.

Local historian Jack Anthony tells the story this way in his History Trail Run.
"About two miles north of Pring Station we cross over a unassuming creek called Dirty Woman Creek. Originally named Dirty Woman Gulch in 1861, this branch of Monument Creek gained the name “Dirty Woman Creek” thanks to a lady who lived in a shack along the creek," he writes.
One local source even claims that part of the woman's shack survives near the turnoff to Mount Herman and Mitchell Roads.
"The Dirty Woman received her name from soldiers who traveled back and forth though the region in the 1860’s. The ‘Dirty Woman’ didn’t exactly keep herself, her property and children very clean; thus, the name ‘Dirty Woman’ stuck. She tended goats, chickens, cats, dogs, and other animals on her ranch and in her house! The ‘Dirty Woman” also made butter by trampling the cream with her bare feet! Perhaps ‘Dirty Woman’ brand butter was wee bit gritty," Anthony notes.
Lucille Lavelett version of the story of Dirty Woman, in her 1975 book "Through the Years at Monument Colorado," goes this way.
"Dirty Woman Gulch as it was named in the 1870s and later called Dirty Woman Creek, is the first creek crossed when entering Monument from the South. It is South of the Monument School and is a branch of the Monument Creek. In the 1870s, the school was built near the gulch. Near the stream lived a woman in a shack. The woman kept goats, chickens, cats, dogs and other animals and did not keep it, or herself very clean, so in speaking, the kids called it Dirty Woman Gulch and still is known by that name."
Others weighed in on the tale. From the diary of Mrs. Byron N. Sanford, December 27, 1861:
“Last night we stopped at what is called ‘Dirty Woman Ranch’ and really it could have no more appropriate name. Minnie and I go into the house and cook meals when we can. As we entered the door of this place the woman was pelting something with a broomstick. A young pig had wandered into the kitchen and got his head fast in a cream jar. It fitted pretty close and in frantic efforts to get loose, rolled over and over on the floor, while the youngsters who swarmed, it seemed, scampered under the beds as the mother pounded and yelled until, at last, the jar and pig rolled out into the yard. We gave the youngsters some cookies as they gaped at us in wonder, paid the ‘Dirty Woman’ for her trouble and returned to camp.”
"Remember the Teachout’s stagecoach stop," Anthony writes, "As stage coaches traveled north to Denver their next stop would be near the “Dirty Woman’s” place. The stagecoach drivers called it the ‘Dirty Woman’ stop. Perhaps you can pause as you cross her creek, look southwest and imagine the ‘Dirty Woman’ and her kids cheering you on as you trod north," says Anthony.
But, it appears, she wasn't the only "Dirty Woman" in the area at the time.
"It wasn’t long before Florissant became a very profitable town bringing in blacksmiths, livestock, a sawmill, and of course the doctoring services of Nancy Ann Roberts. Nancy Ann Roberts was known as “Dirty Woman” for her harsh demeanor and foul mouth. She wore a dirt-crusted dress, smoked a corncob pipe and swore like a man. She would offer her services as midwife and herbalist whenever they were needed. In addition to her doctoring services she built, owned, and operated the local sawmill on her land, Dirty Woman Ranch," notes a history of homesteaders and settlers in the Florissant Fossil Beds National Monument history information.