Bull-riding blues, it is not for the money, and still in search of the real cowboys 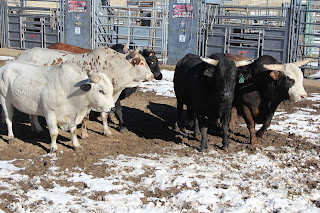 To most competitors, rodeo is simply a way of life

A rosin-covered roped tied my right hand to the 1600-pound bull. I straddled the animal and squeezed my knees hard into the indentions in muscle structure of its massive shoulders. Two men, John Tillotson and Grant Schultz, wearing dusty cowboy hats and the regular gear, explained to me what I must do to survive. Though I had met neither of them prior to that night, I sort of trusted them. Had to: they had been in the same position minutes before and I sure didn’t know what I was doing.

Lord knows it wasn’t for the money involved.
I paid $10 for ticket to ride and might have cleared $70 or $80 after gas and food was considered, even if I did win something. That was not likely.
More than thirty years ago I rode a bull for the first time at legendary bareback rider Bruce Ford’s arena in Kersey Colorado. I was reminded of that last week looking at TZ Ranch’s bucking bulls last week. Owner Ty Rinaldo suggested I come out sometime and climb aboard again.
Easily dismissed. But I thought also about what had changed in thirty years.
When the ProRodeo Hall of Fame and Museum of the American Cowboy in Colorado Springs closed in January of 2005, just as National Western Stock Show was gearing up for its annual run, Bruce Ford was quoted in a Denver Post story by Kevin Simpson. It reopened again on April 9, 2005.
The PRCA headquarters, established in 1979 in Colorado Springs, also houses the ProRodeo Hall of Fame and Museum of the American Cowboy.
Since 2003, the PRCA has sanctioned events that feature bull riding alone called the Xtreme Bulls tour.
These events are held in conjunction with less than a handful of the PRCA's several hundreds of annual rodeos. Forty PRCA bull riders compete in a select rodeo arena in a one day competition, and the top 12 riders based on scores come back to the championship round. The rider with the most points on two bulls wins the event. The PRCA crowns an Xtreme Bulls tour champion every year.
“Rodeo is making money now, and it’s kind of detracting from what rodeo is all about, ... an American pie kind of deal,” said Ford ten years ago.
According to most reports, the attraction has more than 50,000 visitors a year.
“To some, rodeo is a sport. To others, it’s a business. But to most competitors, rodeo is simply a way of life,” notes the PRCA web site at http://prorodeo.org/hof/.
Way of life or not, it is changing. There is more rodeo on TV, more fans, more rodeos, more prize money, more, more. More than a half million people a year attend the National Western. The PRCA staff consists of about 70 full-time employees, but grows to nearly 100 during the peak rodeo season, according to recent information from the group.
The Professional Bull Riders, Inc., headquartered in Pueblo, was created in 1992 when a group of 20 bull riders broke away from the traditional rodeo scene seeking mainstream attention for the sport of professional bull riding.
“They felt that, as the most popular event at a rodeo, bull riding deserved to be in the limelight and could easily stand alone. Each rider invested a hard-earned $1,000, a few of them borrowing from family and friends, to start the PBR,” according to PBR information.
“Owned today by 44 cowboys, management and Spire Capital, the PBR continues to establish milestones in organizational revenue, bull rider earnings, record breaking performances, and media attention. It still relishes the title of being the fastest growing sport in the country,” according to their information.
But is more, better?
I don’t know. But I think you need to ask some cowboys. Not me, but some real ones.
The bull I was to ride was one of the last ones in the chutes. Someone else who hadn’t ridden very much wanted the one they picked out for me — but one of Ford’s employees told them it was mine.
They got the big red animal in one of the four chutes with a little help from an electronic cattle prod. I could see steam coming up off the back of the bull. Tillotson told me to put my foot between its shoulders and move it around a little, then slowly ease down on to its back. He and Schultz helped put more rosin on a rope and glove they loaned me and explained how to wrap the rope around my hand. So there I was, strapped like a backpack on a beast 10 times my size.
Tillotson asked, “Are you ready?”
“I guess,” I answered nervously and gave them the signal to open the gate.
The bull went the opposite way they told me it would. I handled that fine but then it tried to throw me backwards twice and forwards once. I was off before I knew what was going on. I saw Tillotson coming out to get me after going over the bull’s head. He told me later, only half jokingly, if the bull came after him he was going to hold me in front.
A couple of cowboys chased the animal through the gates and it was over. I had ridden my bull, maybe only for a few seconds, but nevertheless, a ride. It’s something I can still talk about thirty years later. And the money had no bearing on it all.

###
Photo Information: TZ Ranch’s bucking bulls are some of the baddest buckers in the business says Owner Ty Rinaldo and suggested I come out sometime and climb aboard again.