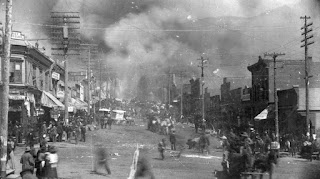 Throw sand, and pour water.  For thousands of years, if fire broke out that needed snuffed, those aforementioned materials were just about the only alternative used for fighting it. But as Newton noted in one of his three laws, for every action, there is an equal and opposite reaction.
One of the odd, but interesting, elements of the fire fighting process as it has developed over time is "better firefighting through chemistry."
Perhaps an even more interesting offshoot of those theories, sometimes taken to extreme locally, is the use of dynamite.

Cripple Creek and Dynamite
"The fire started in the Portland hotel, where it broke out in half a dozen places at the same time, giving color to the report that the first fire of last week was designed by incendiaries that they might make a raid on the First National Bank which carried over $100,000 cash in its vaults to meet the payrolls of the district that mature tomorrow. The fire spread with a rapidity that can be compared only to the progress of the fire on Saturday. It could not be checked, and from the first alarm preparations were made to repel the destroyer," reported papers all over the country in headlines of Cripple Creek, including The Daily Northwestern of Oshkosh, Wisconsin, on April 30, 1896.
"Special trains were run from Victor and Gillette to bring in miners with sticks of dynamite ready to use wherever there was any call for it. It was more common than water at a city fire, and the lavish use was productive of many fatalities. The Palace hotel, containing 300 rooms was one of the first places attacked with dynamite, and from the results it would appear that no warning was given of the impending explosion. As the walls tottered in response to the tremendous charges of giant powder the air was filled with shrieks of dying men, who had been caught in their rooms and dragged down in the wreck. Before the wreckers could offer any aid they were driven back by the flames that were rolling over the site of the hotel."
The Northwestern continued. "Thousands of homeless people shivered about camp fires or wandered among the ruins of this once prosperous city throughout the night. The cold was severe and toward morning snow began to fall. During the night, for a distance of a mile to the right and left, the burning embers presented a sight almost incomparable. Standing on the hill beyond the burned district and to the west, the picture was one of a huge bowl, with the steam rising above. Everywhere along the thoroughfares can be seen the work of dynamite, a great mass of kindling wood."
Much of blasting occurred in areas with little or no access to the more traditional materials.
"A company of the Colorado National Guard is on duty in the unburned district. Numerous arrests have been made in the outside district, resort to which has been made by the vagrant element, which lately has infested Cripple Creek. All night fires were starting up occasionally on the placer. Where possible the residents pulled the houses down and if that failed, blew them up. They had no water in that portion of the city," reported papers in the district.
"A rumor is in circulation that a man was seen in the act of setting fire to a dwelling on Capitol Hill and was shot by a resident, just as the fire bug was shot and killed by  Lloyd Thompson yesterday. Mayor Doyle of Victor has employed two fire wardens for every block in the city, as it has been rumored that fire bugs are after that town as well as Cripple Creek. A man was caught late in the afternoon in the very act of firing the rear of the  Newell company's store. He is in jail. The total loss by yesterday's fire is now estimated at $1,500,000. The insurance will probably foot up between $400,000 and $500,000," other stories noted.
"Many other individual losses run as high as $20,000. All the local newspapers, banks and express offices, the telegraph and telephone offices and nearly all stores, restaurants and lodging houses are wiped out. Two men were caught building a fire under a saloon in Poverty Gulch. An officer fired four shots at them and they were captured. On their person was a bunch of skeleton keys" 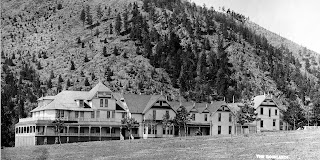 Chemical Firefighting
Twenty-five years later and roughly about the same number of miles distant, it was different chemicals that were relied on when Palmer Lake bought their first fire truck.
Though residents never seemed to worry much about it before, after the Rocklands Hotel burned in Palmer Lake in September of 1920, it became increasingly evident that some sort of fire equipment was needed to combat possible future conflagrations.
"The destruction of this grand, four-story hotel, which opened in 1889, was not only a grand financial loss for Palmer Lake's summer tourist industry, but a psychological blow to the town's identity, " writes Dan Edwards in his 2012 book "The beginnings of the Palmer Lake Volunteer Fire Department (PLVFD)."
By spring, 1921, the town purchased a fire engine from Julius Pearse Fire Department Company.
"The truck, with a 40 gallon chemical tank and hose wagon mounted on 1921 Dodge chassis, arrived in April," wrote Edwards. "The tank was filled with mixture of water and baking soda. Sulphuric acid was stored at the firehouse in carboy, a large 15+ gallon thick glass bottle. Inside the chemical  tank was a covered holder. A glass jar. filled from the carboy, would rest in the holder cage. At the fire, a fireman would rotate the tank to spill the acid, and the resulting chemical reaction would produce a foamy liquid that was sprayed on the fire." Newspaper war's unique chemistry
Not always was Chemistry the fireman's friend, as experienced by the tragic effects of the chemical fire that broke out in the engraving room of the Denver Post at Sixteenth and Curtis Street in Denver in 1904.
"A four-way newspaper war was ignited by the arrival in Denver of Frederick G. Bonfils and Harry H. Tammen," explains Dick Kreck in his 2000 book "Denver in Flames"
"Papers trade charges and counter charges on everything from politics to coal prices. When a nitric acid spill in the engraving room of the Denver Post kills four firemen, and leaves 14 others incapacitated, the Post's rivals have a field day. A coroner's jury is convened to investigate the Post's culpability in the accident , but suspends its deliberations to await a key witness," summarized Kreck.
"... Shortly before 3:30 on that Tuesday afternoon, engraver Charles Prazak was working on the Post's second-floor etching room at 1623 Curtis Street. As he was opening a sixteen-gallon glass carboy of pure nitric acid (used in making engravings of photographs and drawings), the bottle suddenly split, spilling the acid onto the room's wood floor and creating a haze of noxious brown gas."
Multiple fire companies were dispatched as the acid spread on the floor and under furniture contacting zinc plates on the floor, and employees tried to counteract the acid by throwing sawdust and copious amounts of soda on it.
According to the rival Rocky Mountain News, all three responding fire companies believed they were fighting a fire,"only to stagger out a few brief moments later, their duty done, their lungs filled with a poison no human hand may stay."
When it comes to chemicals, and firefighting, maybe throwing sand and pouring water are not bad alternatives. Use them, if you have them, I guess. But as far as actions and reactions, Newton was an expert in physics, not chemistry.
###

Photo 2:
The Rocklands Hotel in Palmer Lake about 1894.

Photo 3:
A group of children, likely delivery boys and girls, pose outside of The Denver Post newspaper office on 16th (Sixteenth) Street in Denver, Colorado. A sign reads: “The Denver Post, Every Day In The Year.”
Posted by ___ Restless Native at 7:21 PM