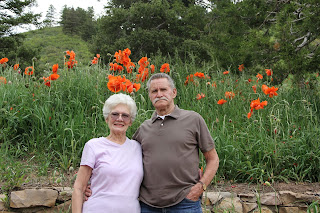 Fifty years is the big part of a lifetime.
But a most vivid memory could pop up just about anywhere in a long, happy span.
Rodger and Judy Voelker had just lived in Palmer Lake about six months when the tornado hit that Wednesday afternoon, a little after 1 p.m., and destroyed the rental house they lived in. They, will remember that forever.
“The U.S.G.S. said all the water that came afterward was a 100 year flood,” said Judy Voelker recently in their current house that survived the twisting winds, and torrential rains that devastated Palmer Lake back in 1965, though the one next to it was destroyed, same as the rental house downhill a bit, that they lived in at the time.
“We didn’t know a lot of people yet, but we got to know them pretty fast,” said Rodger Voelker.
After the storms, there was no running water in town for months, and “We met around the Fort Carson tank truck when we were filling up. Voelker remembers there being about 600 to 800 year-round residents in town at the time, swelling to about twice that in the summer.
“It was the kind of place that you would meet everyone in town out at the dump eventually,” he said.
The response by the locals to the disastrous storms convinced the Voelkers to stay — forever.
“So many people came to help us. That is when Rodger said we’re never going to leave here,” Judy said.
Rodger was working in the basement (no windows) and Judy was upstairs making bread.
“The day of the storm, the skies got really dark,” she said. “There was a terrible hollow feeling, and then the roof started lifting off. It peeled off like a roll top desk.”
When the roar of wind subsided, she ran to the basement door and broke the pane trying to get the door open.
“I said to Rodger, the house is gone,” she remembers. “He patted me on the head and said, “It’s OK.” He thought I was losing it.”
Judy said noise from the Bert and Norita Tatman home downhill at 244 Park Street got their attention that day.
The Tatman home was not destroyed, but heavily damaged. Bert, a co-worker, his wife Norita, and daughters Rhonda, 8, and Becky, 6, were home that day for lunch, after reading gas meters locally.
“The thing I remember most was that it got so dark that the street lights came on,” said Norita Tatman.
“We had finished lunch and I was standing in front of the picture window with the girls watching this storm.”
They (Bert and the coworker) were looking out the other window of the kitchen and saw a roof go by. They told us then to get to the basement.”
Norita said she grabbed the girls by their heads, tucking them under each arm and carrying them to the basement.
“I couldn’t carry them downstairs like that normally if I tried,” she said. In the basement, she said she laid on top of her daughters for protection, “Even though Becky was screaming that I was hurting her.”
“We could hear the roof go off. I was scared.” she said. “It didn’t last that long. Nobody got a scratch. We were covered with insulation.”
Bert said when the noise died down, he was able to climb through debris in the stairwell, and when he got to the ground floor, hail was hitting him in the face and he knew the roof was gone. In fact, one whole end of the house was gone. Norita said the roof was found half a block away, still intact.
“Right after it happened the neighbors (the Voelkers) came running down the hill with blankets.”
“Then, the rains came down,” she said. The Tatmans left town for a few days, staying in Colorado Springs. Later, the gas company Bert worked for supplied a trailer for them in trailer park, until the same builder who constructed the house nine months before the tornado, could rebuild it.
The Voelkers however were still in town when flooding occurred.
“After the tornado, you couldn’t drive anywhere. There were exposed wires and things everywhere,” she said and they went uphill to another neighbor, Andy Krueger’s house. The rain poured that afternoon and as they watched it continue to pour, eventually they heard another frightening roar.
“We saw a wall of water coming out of the canyon at the top of High Street and we heard a terrible roar,” she said. “We watched it hit Reba Bradley’s House and demolish it. It hit Florence Hafer’s house and totally wiped it out. Then it hit the pink stucco house. We watched it fill up with water. The water kept pouring out of the canyon. “By that point, you are just kind of numb.”
Rodger remembers helping in the rescue of Florence Hafer, 62, and Betty Schreiper, 50, who were trapped, neck-deep in swirling water for 90 minutes, under kitchen appliances and cabinets when streams swept away the foundation of their home. When and Air Force Academy crew cab pickup turned over in the mud, Rodger’s new 1965 Ford F-250 four-wheel drive pickup was used to transport the two women to an academy ambulance.
Both couples however, today talk of the good life in Palmer Lake that followed the chaos of that terrible Wednesday afternoon. Planting poppy seeds on hill behind, the quiet times in hills, watching wildlife, lights downvalley, and much more.
Fifty years of good neighbors — a nice, quiet place to live, memories, and knowing that your neighbors are there for you if something happens. Fifty years is a big part of a lifetime.
Records show May and June of 1965 as among the wettest on record with eight inches falling in May that year, and one to two inches of rain and hail falling for 15 days straight from June 7 to June 21. Torrential rain began falling starting June 14, 1965, creating one of the worst floods in Colorado history. 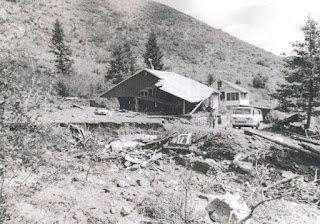 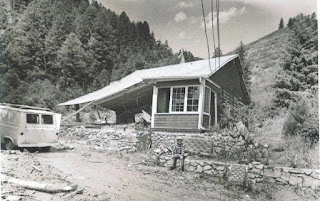