Miners' Union Hall somewhat disfigured, but still in the ring 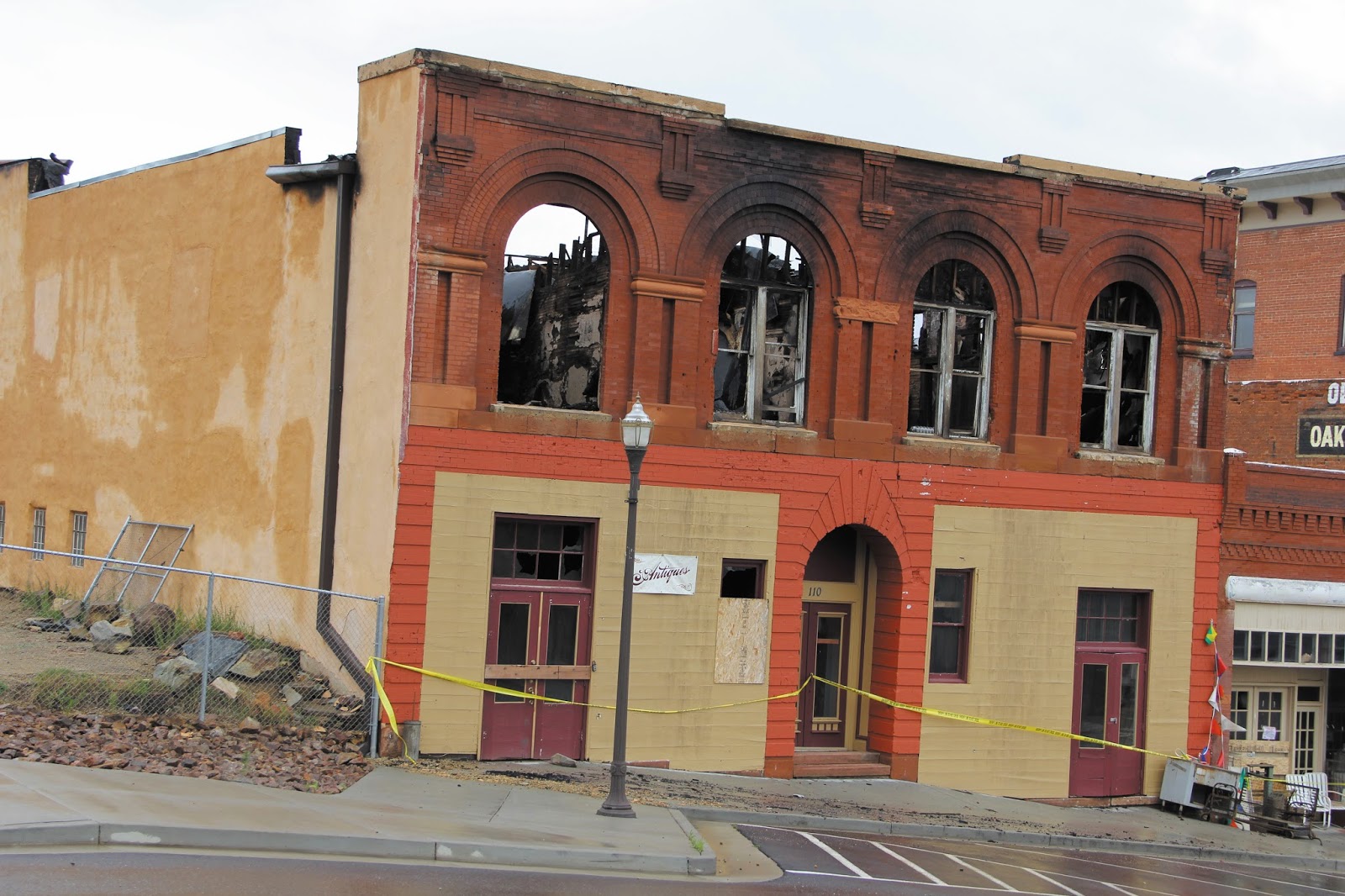 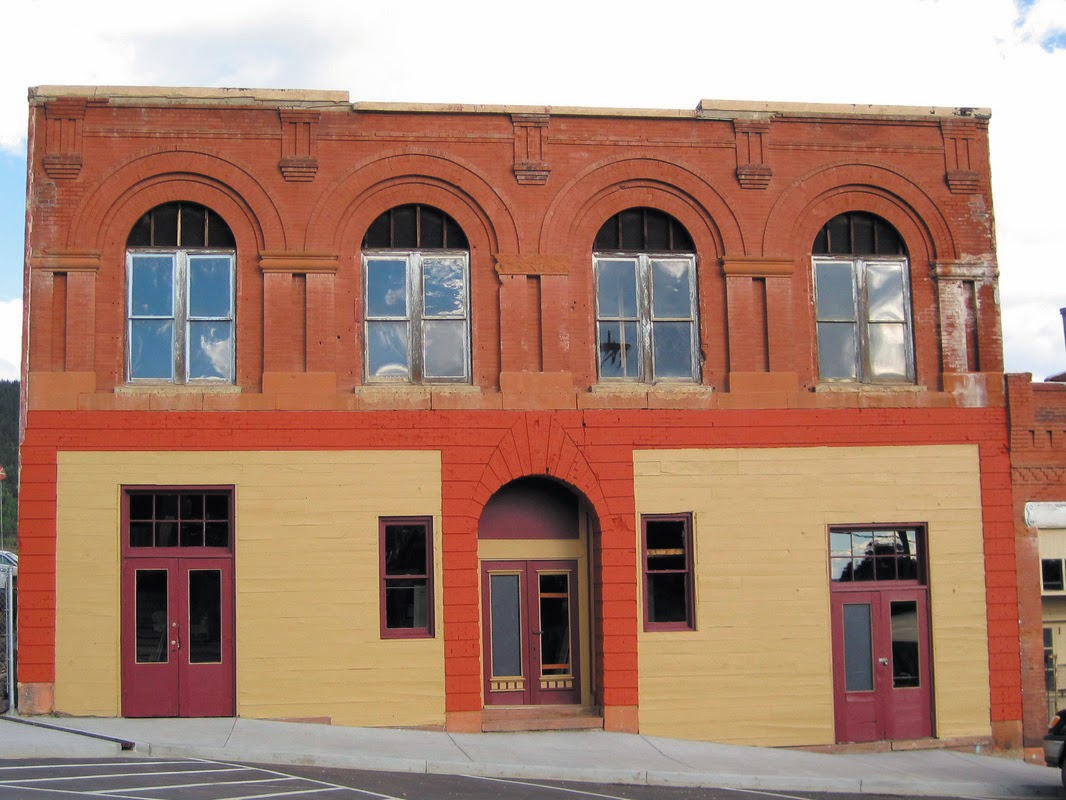 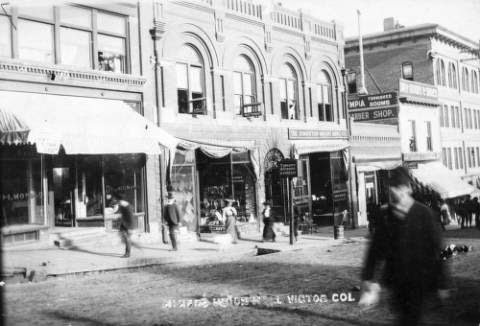 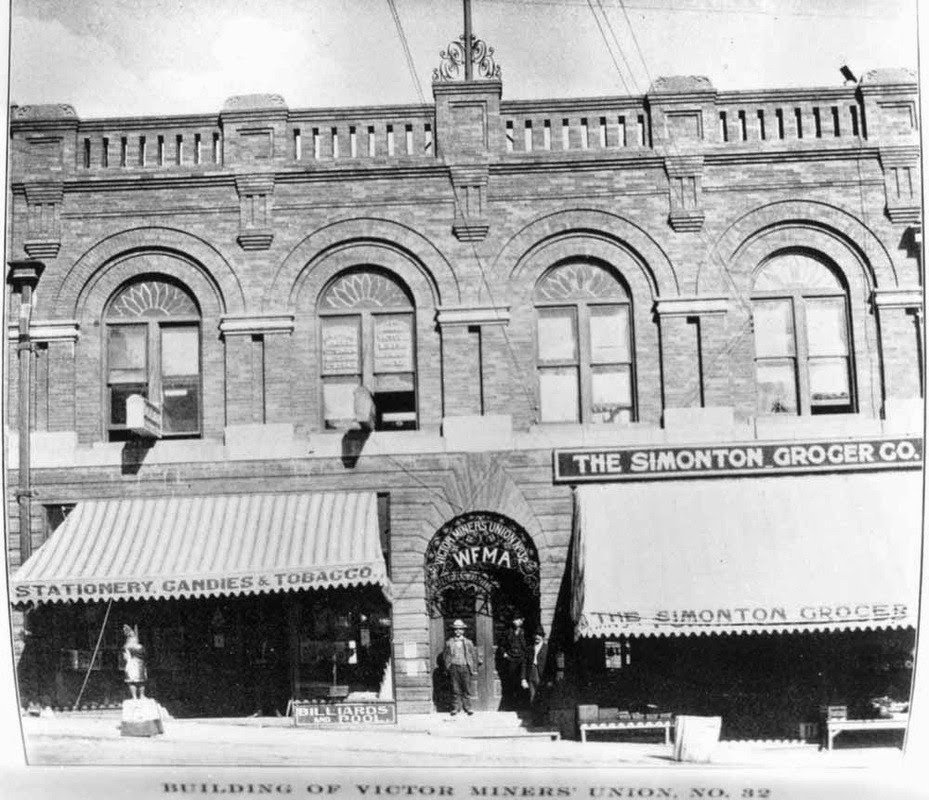 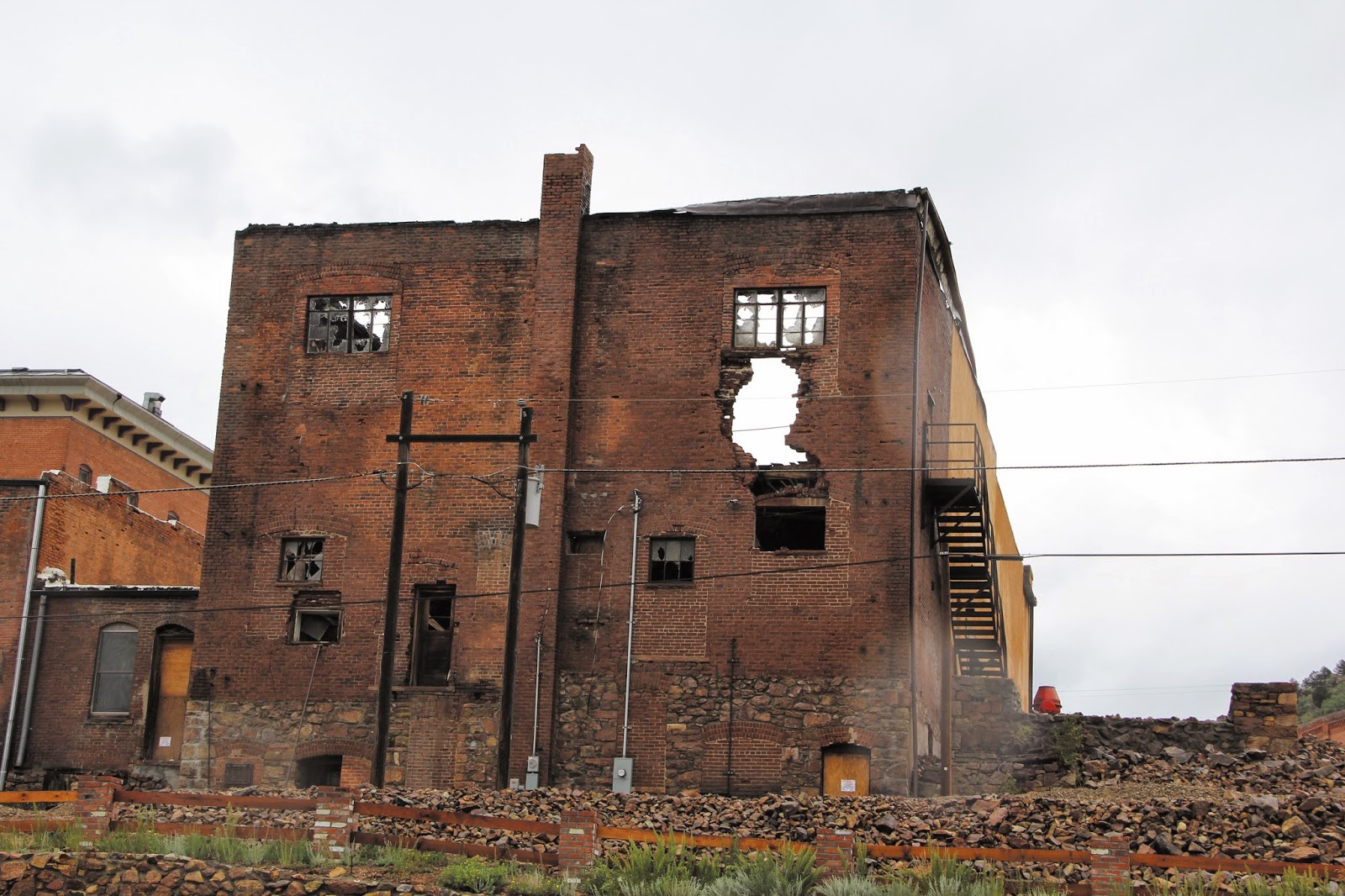 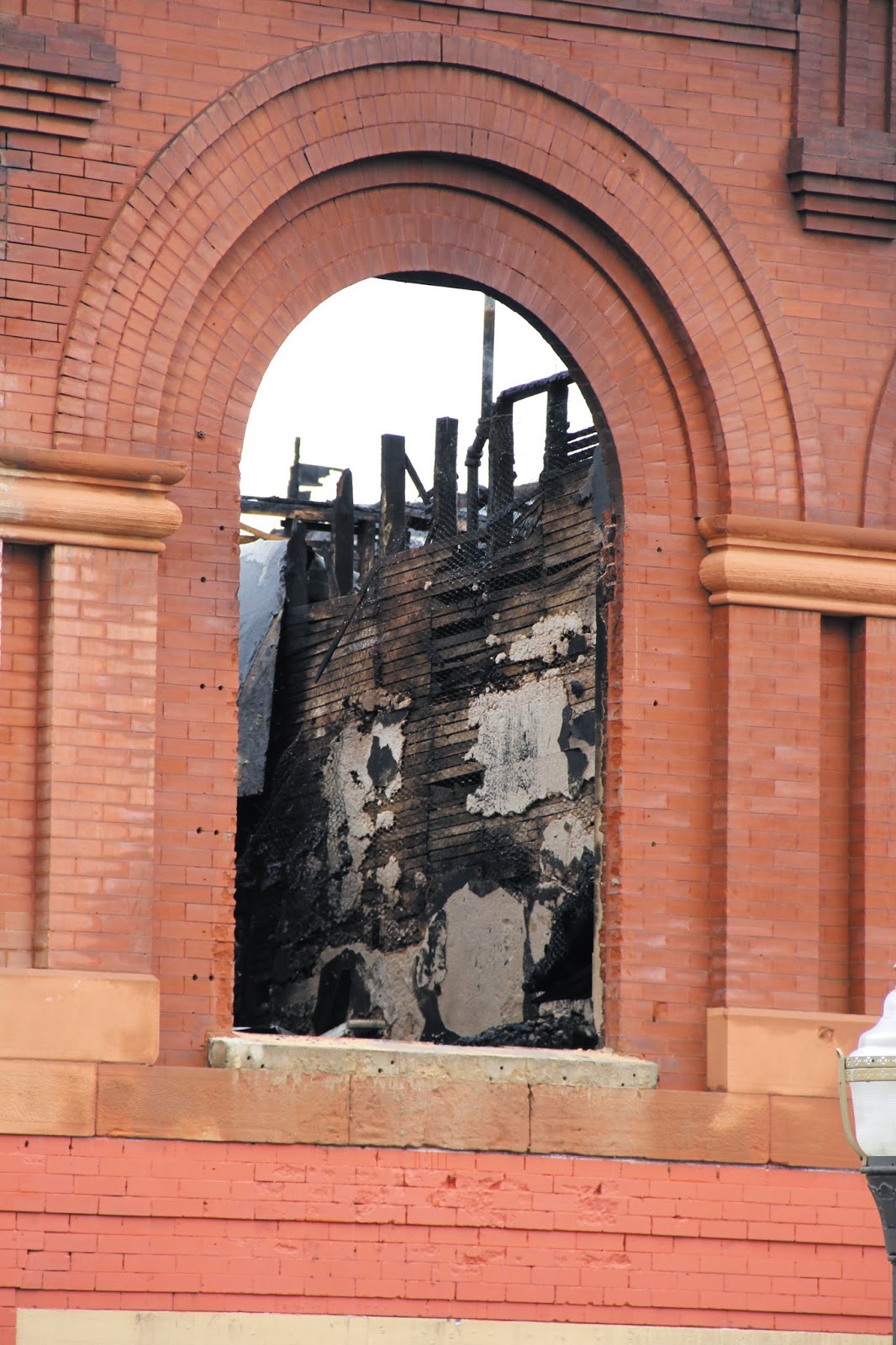 Critical piece of the town’s history

This story was written in late 2014. It was the hope of the owner, and many others then, that the building could still be saved.

In July, (2014) after a being struck by lightning, the historic Miners' Union Hall in Victor was nearly destroyed in a fire that started around 2 p.m. July 26. Fire crews from Victor, Cripple Creek, Four Mile, Divide and Northeast Teller County Fire Protection District helped battle the blaze this summer.
Barbara McMillan owns the building and began restoring it once again in October. Built in 1899, after the devastating fire that destroyed much of the town of Victor, the union hall is a critical piece of the town’s history.
On Monday, June 6, 1904, the Union Hall first found it's place in history when two men were killed, three others were gravely wounded, in the lot below the Gold Coin shaft house across from the Union Hall.
A fight broke out that afternoon as Clarence Hamlin, of the Mine Owner's Association called for chasing "these W.F.M scoundrels out of the district," after the bombing of the Independence train platform killing 13 non-union miners that morning, and injuring at least a dozen more. What began as fist fight, escalated into gunfire and some of the fire seemed to have come from the windows of the Union Hall.

"The militiamen surrounded the Union Hall. Sheriff Ed Bell and Postmaster Danny Sullivan entered the club and told the W.F.M. members to come out," wrote Marshall Sprague, in "Money Mountain."
They refused, he reported and "The militiamen aimed their rifles and poured volley after volley into the rooms, wounding four men. The rest surrendered and were led off by the militia. Berserk civilians rushed into Union Hall, wrecked the walls, smashed furniture, ripped curtains, and destroyed membership ledgers. Afterwards, this gang and other gangs roamed the gold camp for W.FM. members and wrecked every union hall and union store. About two hundred men were imprisoned."
Altogether 225 union members were loaded on trains and deported under guard to Kansas and New Mexico locations.
Because of the dynamiting of the Independence, the W.F.M. became extremely unpopular, and mine owners were able to force them out of the district, according to Sprague.
Years later, the Union Hall served a different, yet noteworthy, purpose.
Margaret Whitehill Geddes, in her book Gold Camp Indian Summer, recalls her husband Kenneth being named the new high school principal of Victor in the late1920s. Kenneth and Margaret later became publishers of the Cripple Creek Times-Record, a merger of the Cripple Creek Times and the Victor Record newspapers and an ancestor of the Pikes Peak Courier.
"He was not only the new principal, but we were to have the apartment in Miners' Union building which had been recently remodeled (roughly) to be used as a gymnasium," wrote Geddes.
"Oh that apartment! The second floor of the building was reached by a long staircase with swinging doors halfway up. On the right at the top were tow doors, one leading to the kitchen, one to the dining room. In front of these were the bedroom and living room. Glass partitions divided the dining room and living room, and the kitchen and the bedroom. Each room was square and there were full length windows in the two front rooms. The windows had been replaced but the marks of the bullets of the miners' strike in 1904 were still showing in the bricks and plaster around them," Geddes wrote.
"Outside the apartment a hall led to the big auditorium, sometimes gym, with a stage at one end. The auditorium was heated two stoves at the far end. Two boys came after school to make the fires. Soon after I'd hear the clump clump of feet on those steep stairs as the basketball boys came up for practice. (Not until later was there a football team, and basketball went on for most of the school year)," Geddes said.
"Besides the games, at least twice a year there were plays staged in the auditorium," she noted.
"The plays produced were not the cheap no-royalty shows, but productions that had been successes on the Broadway stage, probably some time before, but legitimate hits, and they were popular and drew good crowds. The Victor Opera house sadly had been torn down about two years before and people said they appreciated having something to take its place, even if it was only a high school play with local young people taking the parts."
After the lightning strike and the fire this year (2014), McMillan expressed dismay and sorrow, citing not only the potential loss but the lack of funds. “I’m out of money,” she said in July.
In October, however, McMillan submitted a plan to the city to start the cleanup and remodel.

The plan includes repairing holes in the wall, removing the flashing as well as the unstable and damaged bricks. “They’re going to monitor that to make sure the walls aren’t moving,” said Deb Downs, Victor’s city manager.
Soon after McMillan submitted the plan, the contractor, Daniel Halbrook Masonry, pulled permits from the city and started work Oct 3. But difficulties continued, and the building is not restored.

Photos: #1 Front, after fire on July 26, 2014. #2 This photo of the Western Federation Miners Union Hall in Victor was taken just a few months before fire nearly destroyed the building in July. #3 Historic photo of the Union Hall early in the 20th Century. #Historic photo taken shortly after it was built. #4 Back of the building after the recent fire. #5 Front window after July fire. Bullet holes are still visible from the 1904 strike violence.