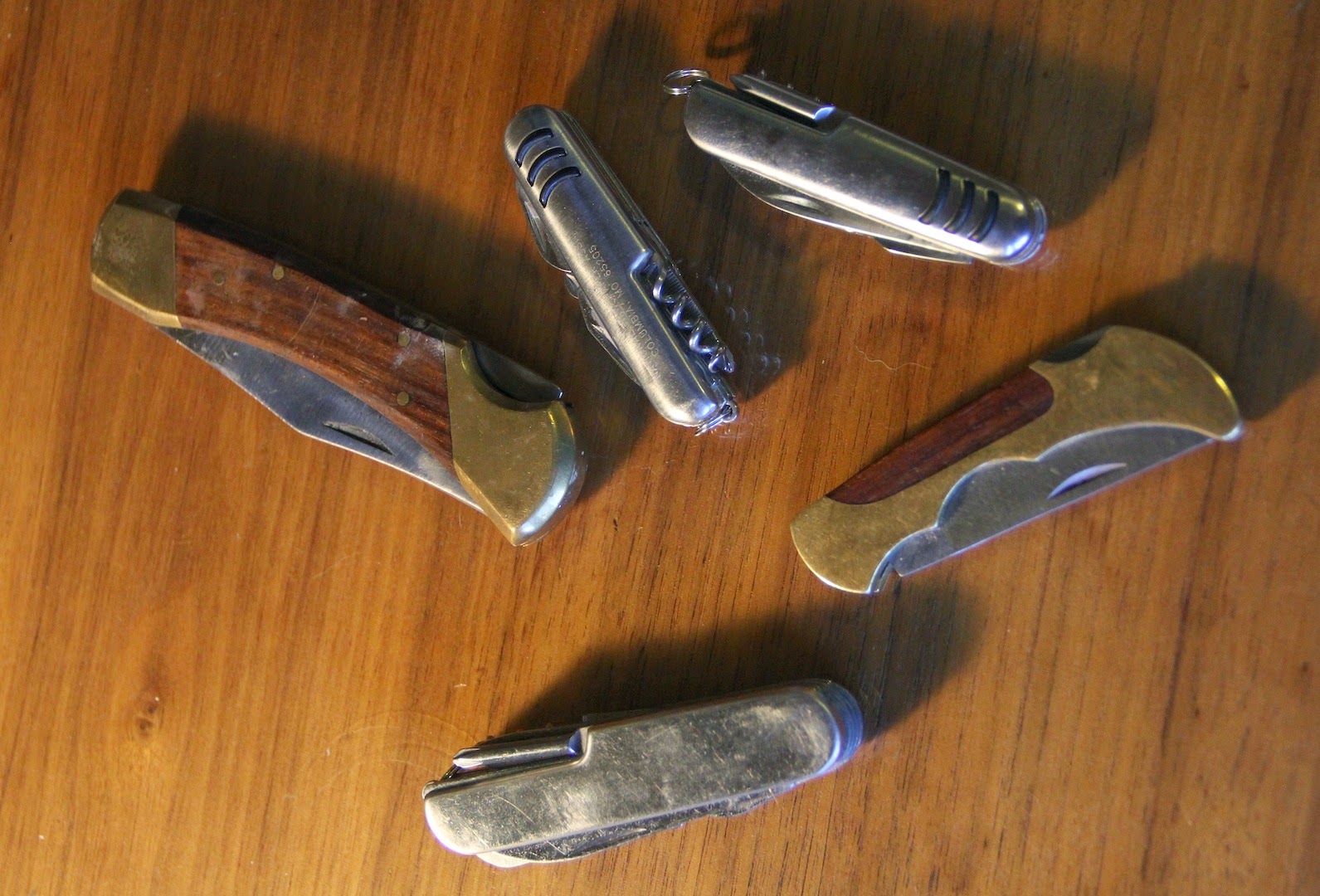 I miss those days, not only for their utility, but for their innocence.

It didn't have anything to do with Second Amendment rights, self-protection, violence, or even the possibility of violence — but when I was little, just about everyone in my Colorado hometown carried a knife around in their pocket, or purse, or hanging from a chain around their neck. I miss those days, not only for their utility, but for their innocence.
We all carried pocket knives, or pen knives, key chain knives, or buck knives on our belts in leather scabbards. At noon, at the high school I went to, you would often see half-a-dozen, to 20, playing games with said knives. No expulsions, no zero-tolerance, no labels, no fear, and relatively no concern about how we would turn out, as knife-game-playing adults.
I know the world is different, but you know, I am nostalgic.
We picked up the habit at early age. With our fathers, mothers, brothers, sisters, uncle or aunts providing our first one. Sometimes, very early. I think I remember Mike Edwards sporting a two-blade Case used for digging in ant hills in some of my earliest memories. He was a year older than me but moved from the house across the alley when I was six or seven.
Some of us would experiment with different types, or styles during our lives, never being pinned down by convention, or conviction, or commitment. Others would settle on one style distinctly, and early, and carry it for life.
My dad had single-blade, locking, bone-handled Case with burn chips in blade from accidentally hitting still "hot" wires under the dash in automotive wiring puzzles that he carried (as far I am able to figure out) his entire life.
Edena Akin flirted for a time dangerously, with a wicked, pearl-handled, switch blade, that she regaled seventh- and eighth-grade boys with, in the prime of pubescence.
Years later, when in high school, and working at the hardware store that sold any manner of pocket knife, (with Bucks, and Old Timers, Case, Imperials and Schrades, just to name a few,)  I came to associate personalities with the knife they carried. Many bought them there at Taylor's, but even if they didn't, they often spent a fair amount of time back at the oil stone on top of the bolt counter sharpening them.
In the back room, far enough away from the red dogs laying on worn Astro-turf, right at armpit level for many folks, the oil stone sat in a foot-long metal case, with a can of 3-in-1 nearby. Usually the stone was smooth side up, but you could flip it to rough, if your piece was really in bad shape. The oil-soaked spongy material would help on the flip.  I don't know for sure how many hours were 'wasted' badgering Merton over at the check-in stand (or at the Micro Fiche) in the name of "knife sharpening," but it was substantial. Today, the Labor Department would probably require reporting it in the "under-employed" number.
You could tell a lot about a person, by the kind of knife he, or she, carried. Merton himself, always had, and was willing to loan briefly, a very small two-blade Old Timer. It was a common type, carried by many in the area (we probably sold 10 two-blade Old Timers, for every KA-Bar or lock blade Buck, but we moved a significant number of those around Christmas time,) and was lost or damaged on occasion, requiring replacement.
I learned about the possibility of "little man syndrome" as slight fellows, driving huge pickup trucks, regularly sharpened seven-inch spear point Gerber survival knives that would have made Napoleon Bonaparte proud. I learned of utilitarians that had trouble dropping an edge on beat up, disjointed Imperials from the dime store, and all personalities in between.
Today, in a time when I don't often carry the small, brass-clad, walnut inlaid, single-lock blade I've had for more than 30 years, it is because I might need to go to the Court House and don't want to mess with security, or I'm traveling and would lose it (or create an international incident) at the air port. I still long for the innocence, and utility of those long-gone days gone by.
It's not the knife I care about, but the utility, and especially— the innocence.

I always have to recheck all of my pockets for contraband when traveling by air or going to the city to see the Sacramento Kings at the Golden one center ( they made me give up my favorite mini multi tool). It’s a frustrating change for those of us being nostalgic.