The craft: Passed on from one generation to another 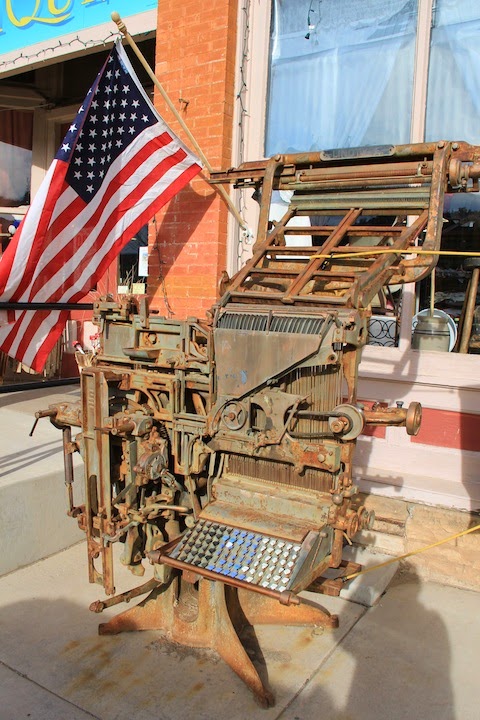 Fifty or sixty years ago, you could wander into a newspaper office and take up a craft that was pretty much same as it had been for 150 years.
Now, as noted in a recent CBS Sunday Morning story, there is really only one Saguache Crescent, run by Dean Coombs, last of the hot-type publishers.
"The press itself dates to about 1915 -- about as long as the Coombs family has been publishing the Crescent, every week, since 1917. The same intricate choreography -- perfected and passed on, one generation to the next," according to CBS.
"They hooked my baby carriage to the back of that press," Coombs said. "The carriage would go back and forth," rocking him to sleep.
"To put it another way, Benjamin Franklin or Mark Twain could walk into the Crescent office and go right to work. The Linotype machine might be a novelty to Franklin (And Twain lost heavily with an investment in a competing machine which, he claimed, “could do everything a human printer can do except get drunk on Saturday night,”) but the cases of hand-set type would be familiar, as would the mutton quads, rules, dingbats, platen pins, chases, quoins, galley trays, and proof press," wrote the late Ed Quillen, way back in 1995.
"I don't actually think there might even be another newspaper in the world using Linotype," Coombs said. "There are none on the United States."
Another paper I am familiar with, of course, The Courier, had a hot type history. The Courier, which is a direct descendant of several papers from Teller County, was started by one Ernest Chapin Gard, who also founded The Palmer Lake Herald, and the Monument Register, as well as about 20 other papers around the country, 11 of them in Colorado.
Gold’s discovery in the Cripple Creek District precipitated Gard and his partner’s race to become the first newspaper in Cripple Creek. He pulled out all the stops to beat William McRea by four days, publishing the first edition of the Cripple Creek Crusher on Dec. 4, 1891.  Descendant of the Crusher and other consolidations, The Cripple Creek Gold Rush still published until 2007 when it became incorporated into Pikes Peak Courier View, of Woodland Park. It is now simply the Pikes Peak Courier.
Gard, and partner W.S. Neal, celebrated the feat by printing in gilded ink — a layer of gold over the regular ink — for the inaugural edition. McRea, four days late and perhaps more than a dollar short, sported vermilion headlines that said “New Gold Field.”

To confuse matters a bit more, the Geddes family armed with a loan from the Golden Cycle Corporation,  Kenneth and Margaret, bought the daily Times-Record of the district on
April 1, 1941. Descendant of the Crusher and the product of consolidations of the Victor Record and the Cripple Creek Times, the Geddes closed on the deal, and then had to turn around and get an eight-page paper out that afternoon.
"We went to the office the morning after we settled the deal and realized we have to fill up eight pages in time to distribute by 5 p.m.," wrote Margaret Geddes in "Gold Camp Indian Summer."
"We discovered how our lives would be changed on the first day. We met the force, which included a foreman, two Linotype operators, two men for general shop work — and then there was Freddie., who admitted he had a difficult time with second grade," Geddes wrote.
"Freddie had a little boy, Eugene, who also had trouble with second grade. Eugene was bound to be musical, his daddy said, 'since he was brought up around a piano.'"
My own history is reflected similarly. Having grown up watching the hot-type Dolores Star being put to bed every week, I was bound to be inked-stained, as I was brought up around a Linotype. The craft, it seems, is passed on from one generation to the next.
And then there is the Dolores Star.

But that is the world of the first newspaper I came in contact with.
The first time I set foot in the Dolores Star, I might have been all of three years old. My next-door neighbors, Larry and Marilyn Pleasant owned “The Star” at that time and their son Andy, was a few months younger than I.
Andy and I played in the attic balcony office, somewhat out of danger of running our tiny fingers through the machinery in busy office below. The Star then, was in between John Lambert’s (the one-legged blacksmith) and Mary Akin’s little shop, but with growing job printing and the tendency for the Pleasants to collect stuff, things were pretty tightly crammed in there. A huge, white, clapboard cabinet contained a few toys in the overhead office but the real entertainment was below.
As the business grew, (and the amount of stuff collected), it became increasingly necessary to find a bigger home for Dolores Star.
The Exon Mercantile Building, built by old man Exon shortly after the town moved up from Big Bend in 1891, was just across what we called Main Street then, and on the corner.
It was a typical turn-of-century, brick building, with decorative cornice work and wood floors, an office up front that looked out on the sidewalk though large windows, and a massive open room with wooden shelves that ran up the walls all the way to the 12-foot pressed tin ceilings. There was another long room extending the length of the building on the side behind the office; and wooden locker-like storage rooms near the back of the open room. Behind them was my favorite ‘old building’ feature of all time — the rope and pulley-powered platform elevator to the basement. Out the back door on the downriver side, was another room that had been the old smoke house. A barn and assorted sheds filled out the property toward the back.
The move of “The Star” building to what formerly constituted Exon Mercantile was quite a deal, as I remember it. Linotype machines, and presses, and other heavy printing equipment rolled across the street on iron pipe, that was moved from the back of the machines, up to the front. Tons of iron inched forward across the street, pushed and pulled by straining men and a few women. Amazingly, I think moving the big stuff took less than a week. But for years afterward, additional items (some involving the newspaper or printing business, but much of it, local historic arcana) continued to collect in the sprawling buildings at the corner of Fourth and Main.
Today, a rusted Linotype parked on the sidewalk, still calls attention to a craft, almost forgotten.