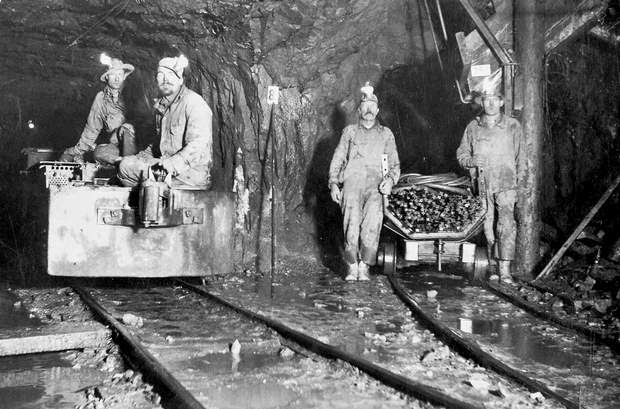 "The usual shift was about 125 people. It would have killed everybody."

We have all been there.

My dad called them "Oh crap! moments," but some are worse than others.

In the mining and exploration industry, my brother tells of the dangerous predicament of 'setting a post' or a concrete plug that blows out of a well head at extreme velocity, destroying everything in its path.

At Lake Peigneur, Louisiana, there was 'the swirling vortex of doom.' Nov. 21, 1980, a twelve-man Texaco drilling crew was forced to stop by loud popping noises, the precarious leaning of the rig, and then a fresh-water lake covering 1,300 acres in about 11-feet of water creates a steadily accelerating whirlpool a quarter of a mile in diameter, with its center directly over the drill site and drops 3.5 billion gallons of water (over about three hours) into Diamond Crystal Salt Mine, just below. Fifty miners are still in the the mine, rigs and other structures are being pulled into the vortex.

"Meanwhile, up on the surface, the tremendous sucking power of the whirlpool was causing violent destruction. It swallowed another nearby drilling platform whole, as well as a barge loading dock, 70 acres of soil from Jefferson Island, trucks, trees, structures, and a parking lot. The sucking force was so strong that it reversed the flow of a 12-mile-long canal which led out to the Gulf of Mexico, and dragged 11 barges from that canal into the swirling vortex, where they disappeared into the flooded mines below. It also overtook a manned tug on the canal, which struggled against the current for as long as possible before the crew had to leap off onto the canal bank and watch as the lake consumed their boat," according to Damninteresting.com.

"After three hours, the lake was drained of its 3.5 billion gallons of water. The water from the canal, now flowing in from the Gulf of Mexico, formed a 150-foot waterfall into the crater where the lake had been, filling it with salty ocean water. As the canal refilled the crater over the next two days, nine of the sunken barges popped back to the surface like corks, though the drilling rigs and tug were left entombed in the ruined salt mine," said the site.

"Despite the enormous destruction of property, no human life was lost in this disaster, nor were there any serious injuries. Within two days, what had previously been an eleven-foot-deep freshwater body was replaced with a 1,300-foot-deep saltwater lake. The lake's biology was changed drastically, and it became home to many species of plants and fish which had not been there previously."

Here in Colorado, just a few years before, there was Lake Emma, and the Sunnyside Mine incident.

"On June 4, 1978, a major physical disaster struck the Sunnyside Mine. At that time rich gold was being mined on the Spur vein under Lake Emma. Although previous core drilling had been done to determine that the mine was a safe distance from the bottom of the lake, 70 feet above.  The lake had been formed thousands of years ago by the scouring action of a glacier. When the glacier passed over the hard quartz-gold vein, it plucked a thin sliver of rock from the downhill side of the vein.  The sliver, about 20 feet in diameter, extended downward about 65 feet below the bottom of the lake," wrote Allen  G. Bird in "Silverton Gold," in 1986.

"On a Sunday afternoon, when the mine crews were at home, lake Emma broke through the spot and emptied thousands of gallons of water and over one million tons of mud into the mine. The crater on the surface was the length of three football fields and about 500 feet wide. The water and the mud had about 1,800-foot fall to reach the American Tunnel level. A 20-ton Plymouth Locomotive parked below the main ore pass was completely flattened. All timber, except for a 200-foot section between "G" and "F" levels, was stripped from the Washington Incline Shaft. All mining tunnels, including the mile-long Terry and the two-mile-long American were filled to the top with mud. Although the mine was insured for $900 million, the insurance company refused to pay any damages. After an expensive court battle, the insurance company was ordered to pay, although they actually paid only about $5,500,000. Had the breakthrough occurred any time other than Sunday, over 125 men would have been killed, leaving no survivors," wrote Bird.

"We all had a close call when Lake Emma  flooded and caved in the mine," said Silverton Miner Terry Rhoades in oral histories captured in "Colorado Mining Stories, Hazards, Heroics, Humor" by Caroline Arlen. " The engineers had actually tested it under the lake for depth. They figured it was a fault going up there, because there was real bad water coming through. They didn't realize it was half full of mud," Rhoades said.
"The guys that were driving that stope — I think it was Fred and Harry Castle — they refused to go to work that Friday night because they said that water was pouring out of there. That Sunday it came through. Luckily nobody was underground. There were places, like where I had been working, where the mud wouldn't have got you, but there was no way you would have been able to make your way out of there, You would have starved to death."

"When Lake Emma caved in and flooded the mine, that was the beginning of the end, right there. The lake was over the mine. I guess they had us mine up too close to it. It was real lucky it waited until Sunday to cave in. it could have happened any other day of the week. Nobody was underground Sunday. The usual shift was about 125 people. It would have killed everybody," Ernst said.

How is it that there is no mention of this disaster in the current news about the 3 million gallon spill?

Because this was wrote on March 17, 2014 and that is before the current disaster...

If the Sunnyside is the low point of the mines around Silverton, I have to wonder how much toxic water is pent up in there, just waiting for the next blowout.

Apparently decades of neglect and an active mine in modern times and owners on book and EPA response to problems is not something Colorado wants to share with our nation. Or Navajo Nation. They were wronged, again. Very sad situation and inept handling of ALL the mine run off over the years. So worried about tourist economy issues, can't do the right thing. Hope the Navajo and other affected tribes make this an d other stories surface and soak our pitiful greedy contry for fouling their land.