Hooper was known as the 'father of railroad publicity'

I have spent most of my entire life, of course, in the newspaper business. But if born 100 years earlier, it might have been the railroads, or both — like Shadrack K. Hooper.
Newspaper editor Tim McGuire says "Many people have heard the old story about the railroads and how they should have realized they were in the transportation business in the same way newspapers ought to realize they're in the information business. I heard someone says a few years ago that in fact the railroad people knew they needed to be in the transportation business. They just loved the railroads so much they couldn't make the change. There is a lot of that in our business."
McGuire is right of course, but Hooper knew how to make it work.
"Hooper was known as the 'father of railroad publicity' and his extensive advertising efforts on behalf of the Rio Grande made the railroad known throughout America and Europe," wrote my friend, Palmer Lake historian Dan Edwards in one of his papers. "Many prominent hotels, union stations, and ticket offices displayed pictures of scenery along the route of the Rio Grande that Hooper had provided. He arranged for the photographer, William H. Jackson and the writer, Ernest Ingersoll, to travel over the Rio Grande in special trains and record in pictures and words what they saw. Hooper popularized the Royal Gorge and the Black Canyon's Curicanti needle that served as emblems of the railroad. He also published several booklets on tourist spots and landmarks along the route of the Rio Grande."
Those booklets... works of a lost art, as far as I am concerned.
"For the convenience and information of the traveling public this booklet is issued," writes Hooper in the introduction of his most circulated one. "The attempt is made in as few as words as possible to inform those who desire information, how they may easiest, with least expense and inconvenience, visit any or all of the many attractions in Colorado, Utah and New Mexico. A perusal of these pages will enable tourists to determine what points they visit, inform them of the attractions they will see while en route, and afford them much useful information."
S.K. Hooper, like so many in development of the railroads, had learned the trade in the Civil War. He worked for five different lines before becoming general passenger and ticket agent for the Denver and Rio Grande in 1884, a position he held for decades, scaling back duties at the end of his career, finally retiring in 1917.
"Major Hooper did not neglect Palmer Lake. He worked with Finley Thompson and to the officials of the Glen Park companies to promote Palmer Lake as a tourist destination and offer special railroad fares for Chautauqua travelers to Glen Park. Hooper bought a lot in Glen Park in 1887, and later spent time during the summers at 'Casa Pobre,' his cottage in Pine Crest. He vacationed at Palmer Lake as late as 1917. He died at Denver in March 1923," according to Dan Edwards' research.
Born more than 100 years earlier, I might like working for someone like S.K. Hooper. I might have found it hard to change over time. There is a lot of that in our business. 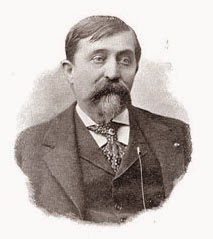