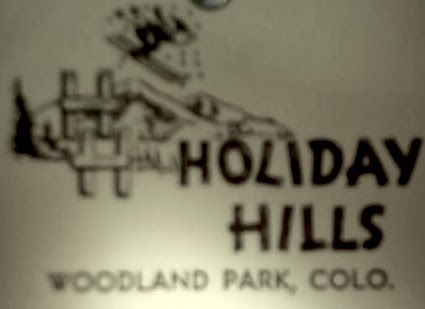 "The Rocky Mountain Regions's newest ski facility, the Holiday Hill Ski Area is now open," proclaimed the Ute Pass Courier on January 21, 1965. The paper attributed the news to the owners Harlan and Kay Nimrod.
I spoke to Kay Nimrod a few years ago, about her family's experiences running the area from 1963 to 1972.
"It was a lot of hard work. Didn't know how complicated it would be before we got into it. Things like finding insurance — we were down to only being able to find two companies, Lloyd's of London, and Capella, that would even consider writing a policy. You get older, I guess you smarten up," Kay said.
But she did have fond memories related to their experience.
"Some days, we would be swamped. Our three children worked there. People would come up from Colorado Springs and Pueblo. We didn't make snow, so it wouldn't be icy. It gave the kids growing up a chance to work outside. And I always enjoyed skiers. They are not picky. If we were out of root beer, they would drink a lemon-lime soda. And their checks didn't bounce.
"Located three miles west of Woodland Park on U.S. Highway 24, the ski area development was started in the fall of 1962," says the Courier article. "Signs on the highway direct enthusiasts to the easily accessible area. There is ample parking space provided at the site. Nimrod, who developed the Holiday Hills subdivision, and is now selling acreages for mountain homes in the area."
The 1965 account says, "Ski trails have been bulldozed and hand raked to clear rocks and stumps from the skiing area."
"The ski tow at the site is a J-Bar type nearly 2,000 feet in length, and is enhanced by a nearly complete A-frame lodge equipped large moss-rock fireplace. It is planned to serve refreshments in the lodge."
Kay and Harlan Nimrod, both 83, when this was written in 2014, and were living in Colorado Springs and had for the last 22 years. They sold the lift equipment years ago and dissolved the corporation. At its peak, the area had three lifts, rope tows, and nearly seven miles of trails.
"But we were a lot younger back then. And you had to depend so much on the weather. I have sympathy for farmers. Nature is not always cooperative."
Kay said they had a contract with the Air Force Academy at the time to run a ski school to teach cadets the basics.
She had done extensive research on temperatures and rainfall in that watershed before opening however, and they were fairly comfortable that they would have enough snow to open. During the years of operation, they were not disappointed.
"We were closer than most areas, not as icy, and families could afford to ski there," Kay said.
The price for tow tickets in 1965 was $3 per day and $1.75 for a half day. The area was open from 9 a.m. until the 4:40 p.m. closing.
"The property borders the Colorado Springs watershed at an altitude of 9,600 feet. Vertical rise of the ski run is nearly 400 feet and the rise in the tow line is 280 feet. The other tow services will extend to the lower area next season," reported the Courier in early 1965. "The owners have announced that Mr. and Mrs. Sam Bleam of Woodland Park will help with the operation and supervision of the facility."
Her caution for modern ski entrepreneurs, "You would have to be well-capitalized, for things like insurance (which was difficult back then) and have a lot of energy."