The short and rocky life of The Rocklands 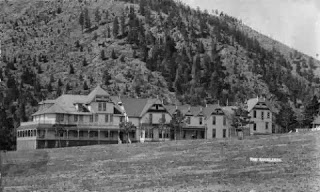 It has been attributed to Mark Twain, but he likely lifted it from others.


Life is short. Break the Rules.

"For 31 years, Palmer Lake could claim one the finest resort hotels in Colorado. Hundreds of guests from around the country checked in during the season to spend a weekend or enjoy a longer summer vacation at the Rocklands Hotel. Its visitors choose among a variety of local activities: attending session of the Rocky Mountain Chautauqua or other events held in the Glen Park Auditorium; hiking; fishing; playing tennis; riding horses; taking excursions in horse-drawn carriages; and participating in entertainments arranged within the hotel," wrote Daniel W. Edwards in his Occasional Paper No. 4 "The Rocklands Hotel at Palmer Lake."
Dr. William Finely Thompson had the idea of marketing Palmer Lake as a health resort as early 1884. Tuberculosis (TB) or "consumption" as the disease was then known, was widely treated in high altitude areas such as Colorado and Switzerland and the good doctor (and dentist) established the Colorado Hotel and Sanitarium company whose purpose, according to records from the Colorado State Archives,  was to build and operate a hotel and sanitarium at Palmer Lake.
By the fall of 1889, The Rocklands was built with borrowed money. The original plan called for building 20 cottages in addition to the hotel. But by the time the hotel opened, Thompson and Dr. Thomas Gaddes, a dentist (who quickly earned an M.D. at the University of Denver to qualify him) was brought in to serve as superintendent of the Palmer Lake Sanitarium, had little borrowed money left to complete that aspect of the project.
"Limited available evidence indicates the sanitarium neither attracted many patients, nor was it a financical success. In the spring of 1890, Dr. Thompson was unable to make payments due on the promissory notes he signed, and his debts by then totaled thousands of dollars. He and his family departed Palmer Lake and moved to New York in August. Dr. Geddes, who must have known Dr. Thompson's dire financial condition, left Palmer Lake that June to spend the summer at Steamboat Springs," wrote Edwards, in the paper cited earlier.
The Rocklands went through a string of different owners in the next few years, with varying degrees of success.
E.A. Tunnell ran the hotel for nearly three years, and later operated the Broadmoor Hotel and Casino.
Under E.A. Tunnell's direction, at least the dances were well-recieved. For example:
"The (Rocklands) hop Saturday night was almost too well attended. The parlors and verandas were full and dining room, which is used for dancing, was not large enough by half for the occasion. The young ladies wore white organdies and other light fabrics. The costumes of the gentlemen varied from golf to bicycle suits, blue coats and white duck to full black dress suits," according to the Rocky Mountain News of August 8, 1897.
"The Rocklands continues full of contented people. Why not? They are the most comfortably lodged and well fed, all the luxuries of the Denver and Colorado Springs markets are daily shipped in and a first-class chef prepares it."
But despite times of great popularity, owners came and went.
Success at The Rocklands waxed and wained.
The end came with a bang.
"Mrs. Lillie E. Hill was 35 years old, divorced, with three children. She had been a music teacher in Illinois, and was managing a rooming house in Cheyenne, Wyoming, in January 1920. Lillie had just signed a deed from a Denver real estate firm to take over The Rocklands, even though it was the end of August. The hotel normally closed for the winter by October 1, but Lillie may have intended to keep it open all year," wrote Edwards.
"Mrs. Hill and her three children arrived at Palmer Lake on August 31 to take charge of The Rocklands Hotel. So it was on the evening of September 2, 1920, Oliver, Mildred, and Mary Hill went down to the basement of The Rocklands, either to light a water heater or make some adjustment to the generator. They carried a candle or kerosene lantern to make their way in the darkness. The youngsters probably knew nothing about the hotel's lighting system and did not realize the risk they were taking. The instant they drew near to the lead tubing pipes or gas tank there was a violent explosion:"
The Colorado Springs Evening Telegraph described what happened.
"The Rockland Hotel, the oldest hostelry at Palmer Lake,  23 miles north of Colorado Springs, was totally destroyed last night following an explosion at 8:30 o'clock of the acetylene lighting system that shook the entire village and could be heard for miles. Oliver Hill, 18, Mildred Hill, 14, and Mary Hill, 10, children of the proprietor, Mrs. L.E. Hill, who only took over the hotel on Tuesday, were severely burned by the blast from the gas tank. The explosion cause by the children entering the gas room in the basement with a lighted flame where a leak in the system caught the flame and in a second the big frame structure was rocked by the blast. Flame started at once and in a few minutes the building was in a blaze throughout the four stories. Volunteers from the village and surrounding cottages saw the futility of attempting to save the building and concentrated their efforts on protecting property nearby. which was showered with sparks."
Astoundingly, there were no fatalities and the children escaped the blast, and were treated immediately. Thus, ended the short and rocky life of The Rocklands Hotel of Palmer Lake.