Leaving it to beavers 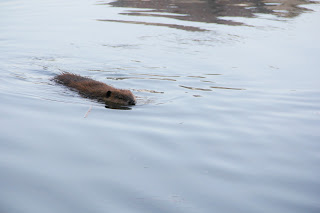 Abundant as beavers are today, it is difficult to believe that once they were on the verge of extinction

Beavers, considered a “keystone” species for their dam building efforts may actually be helping Colorado landowners and others weather recent drought conditions. But how are the beavers faring in the dry conditions?
“Drought does have an impact on beaver though we haven't heard or seen significant impacts thus far,” says Randy Hampton, Colorado Parks and Wildlife Public Information officer.
“In areas where streams dry up, beaver are known to abandon lodges and dams to find other water sources. One advantage this past year was that reservoir storage was high and most larger bodies of water in Colorado were managed to keep minimal flows,” Hampton says.
“Smaller streams were impacted but in the case of beaver, they often store up enough water behind their dams to actually make it through dry periods - as long as the dry periods are short. We would expect to see larger negative impacts to beaver if drought persists into next year and beyond.”
The beaver fur trade reached its peak in the Rocky Mountain West sometime between 1830 and 1832.
"At that time, pelts brought trappers an average of $4 to $6 per pound. A resourceful mountain man could trap 400 to 500 pounds per year. By 1840, the price had fallen to $1 or $2 per pound, and depletion of the beaver reduced the average trap to 150 pounds -- hardly worth the the time of ambitious man who could otherwise earn $350 to $500 per year. By 1840, perhaps only 50 to 75 trappers remained in the West, a far cry from 500 to 600 who worked the region in the 1820s," writes Thomas G. Alexander in "Utah, The Right Place."
"During the early years Rocky Mountain bison meat served as the main substance for the the trappers. By the early 1840s, the mountain men and the Indians had annihilated the buffalo in the Rocky Mountains. The trappers also helped reduce the herds of elk, moose and deer. The communities of small fur-bearing animals dwindled the same way . By the early 1840s, the beaver were almost extinct," according to Alexander.
Beaver expert David M. Armstrong, of the Department of Ecology, Evolutionary Biology Environmental Studies Program, University Museum of Natural History, University of Colorado-Boulder, notes that many mountain ponds, willow thickets and meadows are the works of beavers over time.
“Beavers are active year-round. Their ponds provide navigable water beneath the ice. No mammal other than humans has a great an influence on its surroundings. This is a `keystone species' in riparian communities; without them the ecosystem would change dramatically,” Armstrong says in information provided by the state parks and wildlife department.
And they have a historic role.
“As abundant as beavers are today, it is difficult to believe that once they were on the verge of extinction, trapped for their under fur, which was used to make felt for beaver hats. In the mid-19th century, silk hats replaced beaver felt as a fashion, and that probably saved the beaver from extinction. But, before it ended, the beaver trade opened the mountains of Colorado to European exploration.
The largest rodents native to North America can be greater than three feet in length, and weigh up to 55 pounds.
“It takes a beaver approximately 30 minutes to fell a 5-inch diameter tree,” says Armstrong. 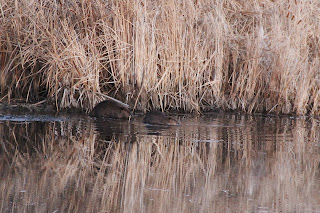 Beaver Breakout Box
Beavers are fairly well protected from predators by their large size and aquatic habits. Mink eat some kits, and coyotes can capture a beaver waddling on dry land. Aside from that, floods may be the largest cause of death. Beaver in Colorado are managed as furbearers.
Range: The beaver lives throughout Colorado in suitable habitat, although it is most abundant in the subalpine zone.
Habitat: Beavers live around ponds and streams that are surrounded by trees.
Diet: Beavers feed on grasses and forbs in the summer, and bark in the winter. Beavers eat the upper, tender branches, leaves and bark of trees. They do not eat the inner wood.
Reproduction: The den houses a nuclear family: parents, yearlings, and four or five kits. A single litter of young is produced each year, born in the spring after about a four-month gestation period.
Source:
David M. Armstrong
Department of Ecology & Evolutionary Biology
Environmental Studies Program, University Museum of Natural History
University of Colorado, Boulder. 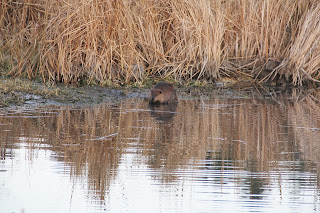