Newspapers and gold seem to go together 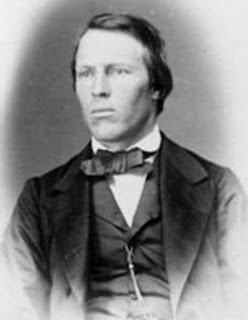 California was left briefly without a newspaper, as reporters, editors, typesetters, and printers sought their fortune in the placers

In what turned out to be one of the major false alarms in mining history, the ‘Pikes Peak Gold Rush’ was cause enough, to start the first newspapers in Colorado history. I say newspapers, because both William Byers and John L. Merrick each came to Denver City in 1859 with that expressed purpose.
Merrick arrived first, and then four days later, Byers showed up. The race to get the first copies on the street was on. And bets were place among the town’s people on who would win. Each of the two faced trouble that included down-pouring rains, leaking roofs, temporary canvas press rooms, and floods.
Byers won the race on Saturday night, April 23, 1859, with the first copies of the Rocky Mountain News. Twenty minutes too late, Merrick delivered his first copies. The loser sold his press and left to seek his fortune in the gold fields.
It was a similar deal apparently in the “World’s Greatest Gold Camp” (a.k.a Cripple Creek), in 1891.
Earnest Chapin Gard, with support from W.S. Neal and editor Bert Pottenger, beat William McCrea to the punch in this district by four days, by moving a press from Palmer Lake to publish the first edition of the “The Cripple Creek Crusher” on December 4, 1891.
The first Crusher was printed with gilded ink – a layer of gold over the regular ink. McCrea’s “Prospector” sported a vermillion headline that said, “New Gold Field.”
The current Pikes Peak Courier View is a descendent of the Crusher and no less than a dozen other news products and consolidations, including the Teller County Times, The Victor Record, Cripple Creek Times Citizen, The Gold Rush, The Ute Pass Courier, The Woodland Park View, Cripple Creek Banner, and The Daily Press. Over the years, more than 20 titles have operated in the district and many of them were absorbed by others.
Those papers have been the stomping grounds of such notable icons of journalism as Lowell Thomas, Jr., in 1910 and 1911, Ralph Carr, who later become a controversial governor of Colorado during World War II, (editor in Victor in about the same time frame as Thomas), Charles G. Ross, who later served as press secretary for president Harry S. Truman, and Irena Ingram, who became Colorado’s first female district judge following a stint as an editor and re-writer for papers in the district.
But gold and newspapers seem to go together, usually.
Newspaper workers abandoning their stations but eventually returning, seems to be a common problem in other areas.
In January of 1848, California Star Editor Ed Kimble was completely unimpressed when a boatload of men from New Helvetia landed in San Francisco with stories and sample gold flakes from Sutter’s Mill.
Kemble was reportedly more concerned with how many acres of wheat John Sutter would plant in the spring and put that in the paper, and many more issues to bed, without reporting the gold strike.
When he finally did on March 18, 1848, newspaper workers abandoned their presses and left for the gold fields forcing Kemble’s Star, and virtually all papers in California to fold or suspend publication. In effect, California was left briefly without a newspaper, as reporters, editors, typesetters, and printers flocked to seek their fortune in the placers. Eventually, many returned to the news industry to carve out a more dependable living. By the mid-1850s, more than 60 different newspapers operated in and around Sutter’s Fort.
In Nevada Territory in 1862, after being less than successful in the gold fields, a disappointed and broke Samuel Clemens went to work for W.L. Jernegan and Alfred  James at the Territorial Enterprise in Virginia City. He worked there for the next two years and it was here that he first wrote under the name Mark Twain.
###