Hotel stories from the sleeping bear 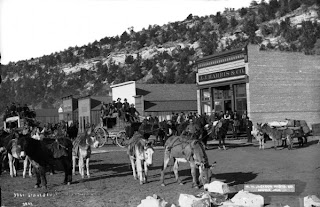 It is kind of like what Norman Mailer said about night bus rides and sleep.
My American life finally came together long enough to give me a little peace, for it was only when on the move, that I can feel anchored in my own memories.
I stared out the bus window, deep in thoughts of Zane Grey, the trains, and the Rio Grande Southern Hotel. Fading, fading, fading fast, -- off in the memory-fogged sleep of a bear.
The Hotel has pretty much always been there, at least since 1893, and that really coincides with the creation of town. It has looked the same as long I can remember … green trim on the white stucco.
I think my first visits probably had something to do with Bill Litton cutting my hair in the corner of it. Complete with a white painted horse contraption that raised me up in barber chair to enable the clippers to buzz through my already short stubble we called a hairdo, at the time.
Wasn’t until later that I realized I was treading on the same hallowed ground of my heroes, Teddy Roosevelt and western author Zane Grey -- if the stories are right.
“Riding and tramping trails would lose half their charm if the motive were only to hunt and to fish. It seems fair to warn the reader who longs to embark upon a bloody game hunt or a chronicle of fishing records that this is not that kind of story. But it will be one for those who love horses and dogs, the long winding dim trails, the wild flowers and the dark still woods, the fragrance of spruce and the smell of camp-fire smoke. And as well for those who love to angle in brown lakes or rushing brooks or chase after the baying hounds or stalk the stag on his lonely heights,” wrote Zane Grey in the short story “Colorado Trails.”
Stories had it that Pearl Zane Grey, a New York City dentist and baseball player, turned novelist, spent nights in the Rio Grande Southern as he researched the West of his books early in the last century, as did Roosevelt on one of his own hunting trips.
Regardless, I have my own tales to tell from that building. Ed Klock and his cousin, Edena Akin, helped me to develop the life-long Tabasco, baloney and crisp iceberg lettuce habit that I have carried since childhood. I ate my first; right there on the fire escape that snakes its way down the back of the building, at those two’s encouragement.
Seem to remember a late night in high school, working on night moves in a corner office there. ‘Was a little too short, could have used a few pounds, tight pants points hardly renown … As Bob Segar noted, “Ain’t it funny how the night moves?” when you just don’t have that much to lose.
The ghost on the landing at the bend in the staircase, the red velvet curtains in the front that blocked out even the most determined rays of sunshine in the late 1970s, the creaky floors, and the strange nooks and crannies… It all combined for character.
Some of the earliest photographs of Dolores might feature the old Hotel, if only to turn the camera a degree. William Henry Jackson shot the pack mules, and the loaded stage, on the corner there by the old J.J. Harris and Co. building, that later became Taylor Hardware. They still grace the history books.
“If the Rio Grande Southern Hotel could talk, it could tell you some stories,” reads the Dec. 30, 2011, story in the Dolores Star by Shannon Livick. “Built in 1893, The Rio Grande Southern was the first boarding house built in Dolores, shortly after the railroad started to travel through the town on the way from Durango to Rico.”
The same story says the Hotel was declared a historic site by the Colorado Historical Society in 1988, and the following year was placed on the National Historic Register.
“The three-story, wood frame building was erected at the southeast corner of Fifth and Central streets in 1893 by E.L. Wilber, the father of Callie Lofquist of Dolores. It is of German Colonial design,” wrote Livick.
Interestingly for me, the same edition of the Dolores Star carried the obit for Joe Edgar Blackmer. I think it was Joe, seated there on the lower back step of the fire escape, who encouraged Ed and Edena to feed me the fire-breathing Tabasco, baloney, lettuce sandwiches in the first place.
I delivered papers there in 1972 and ’73. Spent a lot of time in Bill’s Emporium next door. Near the old Post office, Bud’s Auto, across from the Drug Store and Cattles' Grocery … the memories, and rough ride shake me out of the bear’s fog…
“Off in the basin under the White Slides, back of our camp, the hounds struck a fresh track and in an instant were out of sight. With the cowboy Vern setting the pace we plunged after them. It was rough country. Bogs, brooks, swales, rocky little parks, stretches of timber full of windfalls, groves of aspens so thick we could scarcely squeeze through--all these obstacles soon allowed the hounds to get far away. We came out into a large park, right under the mountain slope, and here we sat our horses listening to the chase. That trail led around the basin and back near to us, up the thick green slope, where high up near a ledge we heard the pack jump this bear. It sounded to us as if he had been roused out of a sleep,” wrote Zane Grey.
###