Afraid of nothing, including the devil himself 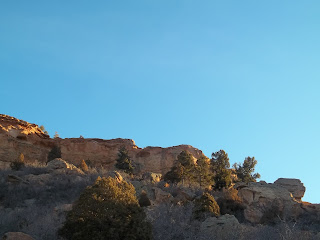 “In rye by the sea, come sing a song with me. Imagine that the world is really flat.
We will dance to the edge of the devil’s darkest ledge … landing on our feet, just like a cat.”
__ Mike Murphy

The numbness is striking. No peace for the peacemaker, a witness to madness, the silent partner to silence.

I am not sure, but maybe I’ve seen the edge. Perhaps more than once.
Maybe it is like Hunter Thompson said, “The Edge... there is no honest way to explain it because the only people who really know where it is, are the ones who have gone over.”
Mental illness is no stranger to strangeness. And strangeness is relative.
I don’t know why, but I have never been afraid … not of the devil, himself.
There is this surreal moment a few years ago. Three of us, respectable businessmen, gathered around a table in ‘high end’ bar in Denver.
One fellow hears the clock ticking. Tick, tick, tick, … tick. He feels the need to do something, today. For him, the fight is against the future. His battle is internal and eternal. To do the things he promised himself. He worries about his legacy, how to take care of his family, or does he even care? What is his place in the world?
Another, at the table, thinks of the dark days of a past that has nearly consumed him -- the terror of being out of control. He actually tries not to think, because he knows, he has done unspeakable things. His battle is with that past. He must try and forget.
Finally, the third is afraid only of feeling nothing. The numbness is striking. No peace for the peacemaker, a witness to madness, the silent partner to silence. For him, he is at war with now, this moment, today. He is afraid of nothing … not the devil, himself.
The hillbilly’s beat-up vehicle drops out of the fog at the lower end of the pass and the small city’s lights illuminate the low-hanging cloud cover draped over the southern quarter. Billy Joel sings, “It’s nine o’clock on a Saturday, The regular crowd shuffles in.” Hey, it is 9 o’clock! Without the dogs, and the work, I guess he might be making love to his tonic and gin.
First week on the job and still finding out the “the who” and “the what” of the circle he finds himself in. It is an odd road traveled. The technology… first you are up, then you are down. The camera you were using… it is a museum piece now. No more paste up. No light tables. No dark room. He remembers all the way back to the days of hot type. Like anything else, grow or die. Challenging, but he stares it in the face. He’s afraid of nothing. Not even the devil, himself.
Every day Mom and Dad pack up everything, as if they are leaving, but they can’t. They are not really sure how long they have been there. Or even where ‘there’ is, because, as Dad says, they have moved the roads around on him. It is not really different, but it’s the same. They seem happy, most of the time, except when they are not. They talk about home, but sometimes they know it is gone. It only a memory, but sometimes, it’s forgotten. It’s almost like a permanent vacation, with no work to bring you home.
When, I leave, it tears at me. Kind of like dropping a kid off at school, but worse. They must be afraid.
I pull myself away and leave them there.
I am not sure, but I think, I looked over the edge.
But, I am afraid nothing. Not even the devil, himself.
###