A kiss goodbye, and may I take a photo 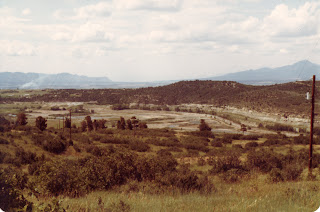 Suddenly realized that some day soon,

all this is going to be underwater.

It must have been sometime in the fall back in the early 1980s when I took my little Honda motorcycle up Dunlap Hill and out through the old roads and bean fields until you come out on the rim of the Dolores River canyon below town.
There was also a rough trail that dropped down into the valley as it overlooked the gravel pits. I was very purposeful that day because I had an epiphany of sorts.
For years we had archeologists from Washington State, and University of Colorado, and probably other places, sifting through the sand and dirt down river – poking in the oak brush, photographing the old buildings. We called them ‘bonediggers.’ There were also Bureau of Land Management folks, and dam contractors clearing brush, and moving cemeteries – all documenting this and documenting that. The place was busy on a global scale with contractors and subcontractors, like Obayashi Gumi Corporation, and other multinationals working on multi-year projects.
My sudden realization was that some day soon, all this is going to be underwater.
Of course we had talked about it for years. Some of my friends worked on portions of the project. Big Mark Thompson ran a mucker in the hole down there. Others moved dirt around outside, or worked as EMTs (emergency medical technicians), or cleared oak brush for subcontractors.
We had big parties in the abandoned buildings and at the Big Rock where we dived off into the swimming hole. We stumbled upon great secrets in the caves below town and ran wild over the rounded rocks. We poked around the headgates of the old dam and recalled when the raft races dangerously finished there.
We parked our cars down in the gravel pits and worked on our night moves, or drank beer in brown bottles, or green barrel-shaped Big Mouth Mickeys (grenades), or Miller ponies, if we were in a hurry.
Huge piles of road base provided impromptu parking lots for muscle cars like Lynn Leavel’s ’69 Roadrunner, Brent Hamilton’s ole’ Chevy pickup with the short bed and headache racks, Joe Scrivner’s Javelin, Bob Coleman’s Cutlass, Rusty Hector’s and Marvin Tabor’s Camaros, Rick Markguard’s ‘Cuda., and Kent Nielson’s Cobra. I envied them because I drove a beat-up 1974 green Vega, and later the motorcycle.
Which brings me back to my epiphany, my realization, and my purpose. I rolled up though the oak brush and out on to the canyon rim. I could see the gravel pits below, the burner out at the sawmill, the power lines dropping into the valley below, and off in the distance of this expansive vista was the Sleeping Ute and Mesa Verde. You could tell where the river – over how-many-ever thousands of years had cut through red dirt, grey clay, and sandstone – to carve out a bed for itself to rage, and gurgle, and trickle, and meander.
But soon the lake would be sleeping in that bed.
I snapped a photo, and rolled back away from the rim, never to see her again.
###
Posted by ___ Restless Native at 9:24 AM

Forgot my granny's fiesta 😆 and you are digging in the archives 😆