Wherever Gard went, newspapers sprang up 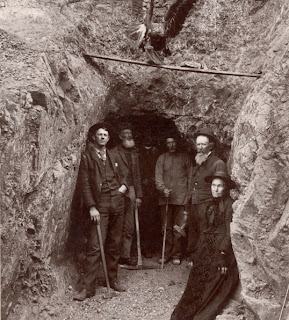 "Lift the mask from some of our courts

and begin to get to your work of salvation"

In my earlier life as a newspaper publisher, it seems to me like I followed around in Ernest Chapin Gard’s footsteps – just about 100 years after he first made his appearance in Colorado. I published the Cripple Creek Gold Rush, which was a direct descendent of Gard’s Cripple Creek Crusher. I managed the Tri-Lakes Tribune in Monument and the Palmer Lake area, a century after Gard’s Palmer Lake Herald and Monument Register. I had worked at papers that covered Mono County in California that had ties, and had a friend that edited the paper in Gardnerville, Nevada with links to Gard.  All were temporary haunts of the bombastic journalist, newspaper publisher, and mining promoter. For a while there, I thought there was some sort of weird Ju-Ju between me and the guy, 100-years-displaced.
Then I figured out that this fellow started or promoted a paper in most every promising mining camp in the West.
“E. Chapin Guard was at Palmer Lake much of the time between 1888 and 1895,” wrote my friend Daniel W. Edwards in a paper for the Palmer Lake Historical Society in July of 2010. Edwards recently retired from the U.S. Department of Comerce in Washington, D.C. and authored the book Dr. William Finely Thompson: Dental Surgeon and Founder of Palmer Lake.
“He published Palmer Lakes first newspaper, served on the first town council, was town attorney, a justice of the peace, filed claims to local mining properties, and wrote a booklet boosting Palmer Lake. Yet, being a restless and ambitious man, Gard could not stay put for long. He established, published, or edited 11 Colorado newspapers in during his career, and his articles appeared in at least six others. As a roving journalist and newspaper editor in Colorado, Gard often resorted to poetry, humor, and sarcasm in his writings and fully exercised his right to freedom of the press. He did contribute to the dialog of democracy by criticizing public officials, but his unrestrained enthusiasm and often bombastic, intemperate rhetoric also provoked strong opposition. Many newspapers of that era practiced a similar style of journalism.”
The Mountain Democrat of Placerville, California, had this to say about E.C. Gard, near the end of his colorful career in its June 4, 1926 edition.
“Thirty years ago, when new mining camps were constantly springing up in the state of Colorado, each new mining camp had a newspaper that boosted everything from the skies above to what was expected to be found thousands of feet underground, and in most cases the name of the editor was E. Chapin Gard. There were two things that Gard could do more of and do better than anyone else in camp, one was write boost articles and the other was to drink good whiskey. He did both constantly and consistently, and helped many men become wealthy but never saved any money himself …
E. Chapin Gard, still boosting, with more pep than half the men we meet every day, who has probably been compelled to forget his age in order not to become old, an example of what it means to always look on the bright side, to look for sunshine instead of clouds, to side-step gloom and cultivate happiness and contentment.”
Of course Gard made enemies, often with his own rhetoric.
“Don’t send your pennies to India,” Gard is quoted in the Pagosa Springs News on July 1, 1898. “The Hottentot can get along for awhile without your contributions … We need missionaries and money and tornados of prayers and rivers of tears to civilize the heathens in darkest America. Turn your gospel machines loose on Denver’s gates of Hell. Batter down the stone walls of Capitol Hill and see Satan and his imps scamper. Go into the big department stores and offices, where physical serfdom cringes and moral ruin crouches and weeps, and rescue the perishing. Lift the mask from some of our courts and begin to get to your work of salvation as rapidly and vigorously as possible. Pry up a few boards under the altar in front of some of our pulpits and see if we don’t need several tons of saving grace right here in Denver.”
E. Chapin Gard was just getting warmed up.
###
Photo info: men and women pose at the Golden Eagle Mine, possibly near Palmer Lake in Colorado. A stuffed golden eagle is mounted on a piece of wood above the opening. The woman wears a long dress with a velvet panel, a jacket, a flat-brimmed hat and fingerless gloves. Horace Swartley Poley, photograpeher, estimated creation date between 1892 and 1901.  Western History/Genealogy Department, Denver Public Library. It is possible the bearded fellow on right is E. Chapin Gard.
Posted by ___ Restless Native at 12:28 PM