View from the Hill: We all remember a big mouth 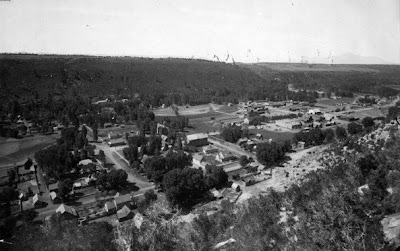 When I wasn't in the river, I was on the hill

Mouth Cave was probably the most known of the in-town holes because it was the biggest. Isn’t that the way of the world? The big mouths are always remembered.
Confucius said that a “man who stands on a hill with his mouth open, will wait a long time for roast duck to drop in.” Maybe so, but the caves of Dolores certainly had other uses. And as a youth, when I wasn’t in the river, I was on the hill.
Perhaps in Mouth Cave, or another part of ‘the Face,’ or ‘Hidden Cave,’ maybe 'Wildcat Cave,' or the ‘Gap,’ on the ‘Shelf,’ or up on top, near the pond. As far as I remember, Mouth Cave’s naming convention was about the only universal moniker out there, with the possible exception of the “D.”
Everything else went by the name used by the person calling it that, at any particular time. It was one of the joys of living near and playing on “The Hill.”
Every generation was afforded the opportunity to name and rename the little hidey-holes, passages, nooks and crannies of the greatest playground on earth.
The term “The Hill,” was in universal usage, however, referring only to the sunny side of the Dolores Valley, as evidenced by certain official titles like “Hillside,” one of the three main streets in the little burg.
Up there, scattered somewhere between the Mountain Mahogany, rattlesnakes, sandstone, Yucca, Pinion and Juniper trees — little bands of neighbor kids would constantly and consistently hone their skills in rabbit tracking, imagination development, and Colorado-style mountaineering.
Development of other more nefarious skills was not out of the question either. BB gun warfare, porn stashing, and activities that may have interested the Bureau of Alcohol, Tobacco and Firearms— perhaps gained some juvenile footholds in unsupervised expanse of near wilderness terrain.
“I doubt there are very many old Dolores homeys that haven't stood on that hillside right about there,” says longtime Dolores resident Ellis Miller recently when looking at the above vintage black and white photograph taken from the hill in the vicinity of 8th Street. “It was a good place to grow up, was it not?”
“Me and my buddies were always up there exploring. Wonder if kids do so in this day in age?” says Gary Willett, in a recent Facebook Post.
Miller, also in a Facebook post, remembers the ritual of painting the “D.”
“That was done every year or so by the "D Club" which was that exclusive fraternity of DHS athletes who had lettered in a sport. When I was little, I remember some of the high school students up there with ladders and little scaffold like swings hanging from the trees above the cliff. It was a magnificent ritual, and to my knowledge nobody got killed or maimed.”
Lisa Berry, in another communication years ago, commented on the accuracy of the maiming claim.
“When I was a junior or senior, I can't remember, a handful of us went up there and hung over the top with ropes and buckets of tar. When finished, I was carrying the open buckets of tar back down the hill. The little old lady living at the bottom didn't like us crossing in her yard and had set up one of those bird type sprinklers at the bottom of the trail. I was waiting for the sprinkler to go around...wait, wait, GO! I took off running down hill to miss the sprinkler and failed to see the clothesline. Well, I was ‘clotheslined’ and the little ole, mean lady had two buckets of tar spilled in her yard. I also had one hell of a rake mark on my neck. Had a volleyball game that night too.”
From my experience over the years, the territory’s benefit lies in its limitless possibilities.
I recall, up the alley from the house in which I grew up on 7th Street, and over near the hill, there in the oak brush, was an old swamp boat with the big fan that once had propelled it from the back of the boat. Behind Fredrickson’s house, the canvas in most places on the watercraft, was rotting off the steel frame and most of the moving parts were rusted to seizure state, but I don’t know how many hours I spent piloting that rusting and tattered relic through the jungles of Viet Nam, down the Piranha-infested waters of the Amazon, or on through the shark-thick seas of the Pacific Theater in WWII. Neighbor kids, I know for a fact, had similar experiences in the years it resided there and I am sure there were comparable artifacts of enlightenment all along the hillside lengths of the little town.
But the fun was not confined only to humans. My sister and I had a Beagle named Suzie that we raised from a pup that would chase rabbits, dawn to dusk, baying at every third breath, up and down on that hillside until someone physically carried her home. Even then, it was difficult to keep her from returning to the prime, rabbit-running locale on her own. She managed to keep up that game for almost 20 years.
Countless fires had blackened the roof of Mouth Cave and thin, powdery, grey-colored, soapy-tasting dust provided the floor. That didn’t matter much though. Because you could stand there at the edge of the cliff, looking out the gaping hole at the view of the town below, and wonder, and imagine, and dream. Waiting for the roast duck to drop in. Just like generations before, and exactly the same as generations that followed. The big mouths are always remembered.
###
Posted by ___ Restless Native at 8:06 PM

Great article, I climbed into those caves countless times growing up. We use to take our lunch and make a day out of it. The cave across from the Sportsmen Center was our cave of choice.~~Carl Higgins

I wouldn't let Elaine hear you say that Suzie was YOUR dog………. :)

Yep...we all learned to smoke up in those caves. Old Golds, Wings, Tarytons, Camels, Lucky Strikes, Phillip Morris and Chesterfields...before filters, and if no cigs, use driftwood. Hope that grouchy old lady wasn't my wonderful Gramma Caddy Plumlee! You sure that was a boat, or could it have been Brumley's snowplane?? Duane Shonhorst (I am sure messing up his name, sorry!) I think fell out or over one of those caves and busted his noggin. Donnie Webb Bruce Plumlee, Gary Benham and I wore out a few capguns hunting and warring up there. Ron Plumlee homeboy til 53.