Just a pretty, little town: What makes it different? 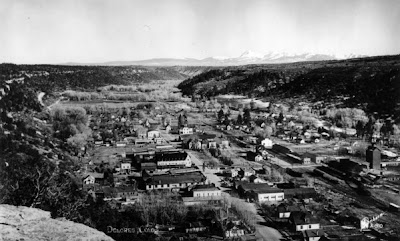 Something to do with your history

What makes it different? It is really just a pretty, little town. I have lived and worked in pretty little towns all my life. And now, that seems like a long time.
Different states, diverse economies, dissimilar periods and conditions encountered.
A person develops an understanding of pretty little towns in the West. They all feel comfortable, welcoming, and accessible to some extent. But only your own, belongs to you. And you, to it.
Of course, it has something to do with your history, the people you have known the longest, and the early imprinting that comes from shared experience. But I think there may be something in the water — or perhaps you absorb something from walking on dirt there, or breathe something in the mountain air.
Anyway, I can tell you with certainty where I come from.
You are looking at a product of… the genuine article, the authentic creation, the original equipment of Dolores, Colorado.
There is no earlier memory for me. River town, three long streets most of its length, arranged originally along the railroad, with consideration for the natural lay of the land… the streambed and hillsides that define the terrain.
Architecture would have to be described as being influenced by Arts and Crafts bungalows, turn of the century rail road, a few Victorians, 1970s ‘modern’ and the mish-mash of structures that arise from limited planning and zoning in the mixed environment governed by Western independence. Right here in River City.
Like most places, there is certainly remnants of what it used to be, with ‘track warehouses, and railroad hotels, and false fronted, hastily constructed brick and wood buildings that went up in the days of a mining or logging economy. Survivor buildings exist that have yet to burn or fall down.
When I was a kid growing up there in the 1960s and ‘70s, I didn’t know anything about the rest of the world. The first 20 years or so, it was my world. Since, I have been quite a few places and have seen some things. Good and bad, happy and sad. But I have come to recognize my place in the world. And though I don’t live there anymore, Dolores is it.
I know folks that lived there a lot longer than I ever did, and still don’t call it home. It is a puzzle. Figuring out where you belong – your place in the world.
A triumph, defeats, dreams and disappointments, you know, I felt them all there. Guess it is like every other location on the planet, a person is going to have ups and downs as they go through life. There is good and evil.
Just like everyone else, in places all over the world, I think I have benefited from tremendous support and suffered incredible betrayals. Also, like everyone else who survived and prospered, the positive and negative forces shape us and contribute to who we are now. And “place” is woven into the fabric of our life.
Down along the river, as the low-angled early morning sun reflects off the pools and draws attention to the white caps – I think about it. Up on the hill, as I zigzag through the ever-crossing trails, scale the sandstone cliffs, and gingerly avoid the prickly pear cactus – I think about it. In my mind’s eye on the football field just below Dunlap Road, as parents line the sidelines on hoods of parked cars yell instruction, encouragement and an occasional threat… I think about it, just as I feel violent pop, the lift and twist. The hometown crowd roars.
It really is just a pretty, little town. Only your own belongs to you. I think that makes it different.
###
Posted by ___ Restless Native at 10:40 AM