Hoping to go from the jailhouse to White House 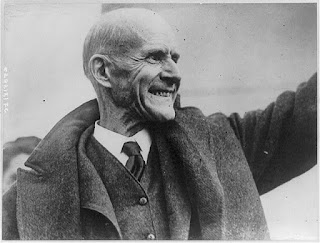 Eugene V. Debs, five-time Socialist candidate for President, set free from prison on Christmas Day as he left the Federal Prison at Atlanta, Ga, in 1921, on Dec. 25.

Socialist arrives early on the "Red Special" in Colorado

By Rob Carrigan, robcarrigan1@gmail.com
The term "socialism" largely remains a "dirty," though arguably an often misunderstood term, in the realm of U.S. politics. I suppose we have the Cold War, anti-Soviet sentiments and McCarthyism, a campaign against alleged communists in the U.S., and recent partisan politics largely to thank for that. But it has been around for a long time, especially here in Colorado. Early on it took the form of one Eugene Debs.
"On Sept. 4, 1908, the Red Special arrived in Denver. Before his scheduled appearance at the Denver Coliseum, Debs dined with Channing Sweet, a prominent socialist leader in Colorado and the West. Sweet, an attorney, had lived in Colorado for nearly 30 years. Part of his time had been spent in Glenwood Springs in the 1880s, where he helped build the town by constructing some of its early buildings," wrote Willa Kane, aformer archivist of, and a current volunteer with the Frontier Historical Society and Museum, in Glenwood Springs.
After working with several smaller unions, including the Brotherhood of Locomotive Firemen, Debs led his union in a major ten-month strike against the CB&Q Railroad in 1888. Debs was instrumental in the founding of the American Railway Union (ARU), one of the nation's first industrial unions. After workers at the Pullman Palace Car Company organized a wildcat strike over pay cuts in the summer of 1894, Debs signed many into the ARU. He led a boycott by the ARU against handling trains with Pullman cars in what became the nationwide Pullman Strike, affecting most lines west of Detroit and more than 250,000 workers in 27 states. Purportedly to keep the mail running, President Grover Cleveland used the United States Army to break the strike. As a leader of the ARU, Debs was convicted of federal charges for defying a court injunction against the strike and served six months in prison.

In prison, Debs read various works of socialist theory and emerged six months later as a committed adherent of the international socialist movement. Debs was a founding member of the Social Democracy of America (1897), the Social Democratic Party of America (1898) and the Socialist Party of America (1901). Debs ran as a Socialist candidate for President of the United States five times, including 1900 (earning 0.6 percent of the popular vote), 1904 (3.0 percent), 1908(2.8 percent), 1912 (6.0 percent), and 1920 (3.4 percent), the last time from a prison cell. He was also a candidate for United States Congress from his native state Indiana in 1916.
But back to the "Red Special" in Colorado.
From Denver, Debs traveled to Leadville on the rails of the Colorado Midland Railway. After delivering speeches along the route, Debs headed for Glenwood Springs. The Glenwood Post newspaper of Sept. 6, 1908, announced his anticipated visit on its front page. The Avalanche Echo newspaper gave the scheduled visit no mention at all. Neither newspaper embraced the socialist cause. The Glenwood Post editorialized, “Eugene is a very mild man but his social philosophy is red hot. Harmless, however, when it gets cold.”

"The bunting-covered Red Special arrived in Glenwood Springs on Sunday, Sept. 7. Debs was taken by the beauty of the town, and took some time to relax at the Hot Springs Pool. By 2 o’clock in the afternoon, an estimated 200 people had gathered to hear Debs deliver his speech. During his oration, he noted Glenwood Springs was a luxury provided by nature and only a small percentage of people could enjoy it. He declared “that when socialism prevails millions will be able to reach the beauty spots that dot the earth, evidently put there by nature for the benefit of all human beings.” Ironically, he delivered his speech on the Glenwood Hot Springs grounds, a place created by the capitalist system," noted Kane.

Debs lost his bid for the presidency in 1908, but did gather close to 500,000 votes nationwide, partly due to the Red Special. In the years to follow, Debs ran again for the presidency, once in 1912 and again in 1920. With his 1920 bid, he ran his campaign from prison, having been convicted of sedition during World War I. One of his campaign slogans in the 1920 run was "From the Jailhouse to the White House."

But Debs had earlier experience in Colorado.

"Home at last from his relentless touring in support of Democratic-Populist fusion Presidential candidate William Jennings Bryan, Gene Debs found he had a surprise visitor for Christmas 1896 — Edward Boyce (1862-1941), President of the Western Federation of Miners. We are accustomed to think of the WF of M as a union; it was not, but rather an umbrella organization of affiliated local miners’ unions, just as the American Federation of Labor is an umbrella organization of affiliated craft union," writes the creators of the Debs Project.

"Boyce had a favor to ask of the ARU chief: there was an expensive and increasingly violent strike in need of resolution in the mining town of Leadville, Colorado — a place where Boyce had himself labored in the mines for four years previously. As the Panic of 1893 hit a double dip recession in 1896; unemployment remained at double-digit levels, business closings swept the land, and commodity prices such as that for silver had fallen precipitously. Mining was distinctly less profitable than it had been and some local operators used the bad economy and weak bottom line as an excuse to slash wages, one after another reducing the basic daily rate for a Leadville miner from $3 a day to $2.50. Those who had not moved the scale were threatening it."

The ideas of the Socialist Party were never embraced by a majority of the population of Colorado, despite Debs’ 1908 visit. However, socialist Channing Sweet of Denver continued to contribute to Colorado politics. He personally ran for several offices under the socialist banner into the 1920s. His son, William Sweet, a Democrat, became Colorado’s 23rd governor. 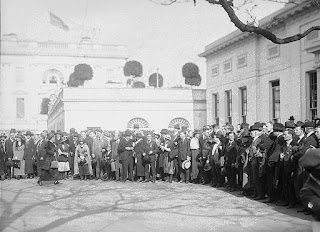 Socialist delegation which was in Washington urging Executive Clemency for Eugene Debs. Photographed at the White House, May 15, 1920.
.
Posted by ___ Restless Native at 2:22 PM