Turning up our noses at 'packinghouse perfume.' 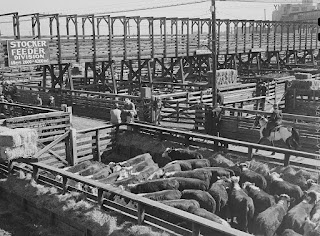 For decades, "the river ran red" with packinghouse waste

When you live most of your days out in the middle of nowhere, (otherwise known as a remote ranch out on Morapos Creek, between Craig and Meeker) you appreciate the chance to ‘go to town’ once in a while. My Granddad liked to ride the train into the stockyards at Denver with the product when he sold cattle. By most accounts, he looked forward to it all year.
“For most of a century, Denver's stockyards teemed with cows and other critters all year long - not just when the annual stock show rolled into town. 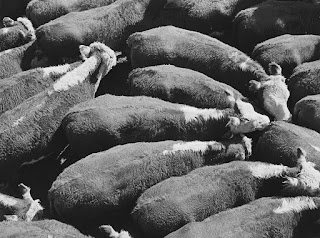 From the 1880s through the 1960s, Denver was the region's go-to bazaar for buying and selling livestock,” wrote Joanne Kelley in a 2006 article in the Rocky Mountain News.
For decades, "the river ran red" with packinghouse waste until rendering plants began processing it, according to Colorado historian Tom Noel's book, “Riding High.”
"Though they cleaned up the river, rendering plants fouled the air with pungent odors that downwind Denverites sniffed about," according to Noel. 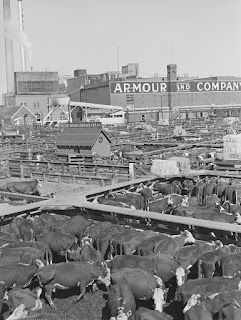 But with better roads and the growth of the trucking industry, the stockyards and the packing plants dispersed into local ‘sale barns’ and the big plants moved away from the city. By 1980, the big yards in Denver were all but shut down as a year-round concern and only memories remained of its former prominence.
“I was born in Chicago about the time of the Spanish-American War. My father, Ralph C. Edwards, had been employed by Stafford Brothers in the Chicago Stockyards. He got a position at $40 a month with Clay, Robinson & Co, at the Denver Union Stockyards,” wrote Mrs. Avery Edwards Abbott in an article titled “I Remember Denver,” in the September, 1962 edition of the Denver Westerners Monthly Roundup. “Our first home in Denver was at 36th and Williams, near old Chutes Park (which terrified the daylights out of me).” 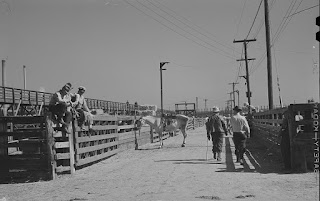 “I recall the old Denver Carnivals, held in the fall, I think. These were a kind of Mardi Gras, with parades and so on, to which my mother took me. Carfare was a nickel, and so was a loaf of bread. We could buy enough beef for supper for a dime, and the butcher gave you a piece of liverwurst free and threw in enough liver for the cat,” wrote Abbott.
She and her family later moved to Elyria, which was a village in Denver County with a population of 1384 in 1900. It was also called Pullman by the railroad and boasted 26 saloons. 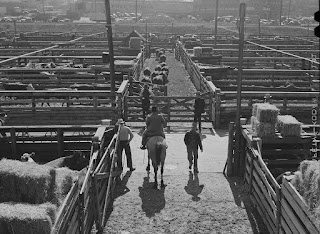 “I remember the torchlight parades, to which Father took me when McKinley was assassinated,” she said. “Father took me for a walk every afternoon and often the walk ended at the Stockyards. I was terrified beyond voice when we took the catwalks above the waving heads of the longhorns in the corrals. The hogs fascinated me, as did the sheep. (Such smelly tastes!”
Abbott tells of Mr. Fine and Mr. Gill at the Stockyards Bank and walking back and forth from home and there for her mother when she was only 6 years old. 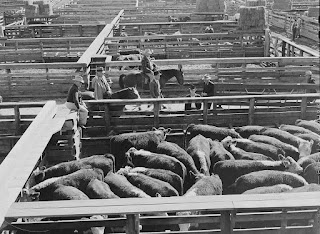 “It never occurred to anyone that there was any danger or my purse being snatched or my being molested. The stockmen, many of them knew who I was and stopped to inquire about Mother and my baby brother. They had been faithful in coming to see Father during his last illness.”
She describes taking the Stout Street cars, one which was marked “Stockyards,” when going down town to Hurlbut’s Grocery, in the Loop, where bananas were ten cents a dozen.
“In the winter, Hurlbut’s smelled of hot coffee, buttered popcorn, cupcakes, overshoes and wet clothing. In summer, large glass jars of lemonade were on display, and cookies, candies, magazines and other penny-catchers.” 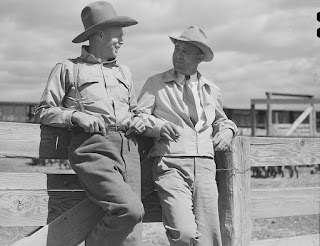 Butter was 15 cents a pound. Lion and Arbuckle were the popular brands for coffee.
“I remember the day when three Polish workmen at the Omaha and Grant Smelter (the shadow of whose smokestack almost fell across our house, and whose smoke was said to kill all our germs) were sitting on kegs of dynamite while eating their lunch. They had the bad judgment to strike matches on the kegs to light their pipes. Parts of the men were picked up all over town and windows were shattered for several blocks around. It was quite an occasion!”
Of course the perfume of the packinghouses blended with the smelter smoke, she said. 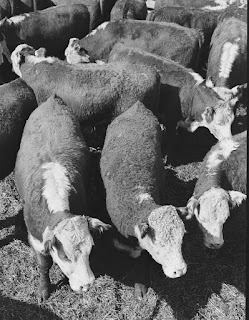 “Some of Mother’s friends turned their noses pretty high when they came to see us. But this was not so they could sniff the perfume to greater advantage.”
With all the different sights, and sounds, and smells and events, it is no wonder that my own grandfather looked forward to ‘going to town’ every year on his trips to the stockyards in Denver.
###
Photo Information: Photos by Marion Post Walcott and Arthur Rothstein from Farm Security Administration, taken at Denver Stockyards, andin Craig, Colorado, stockyard, in 1939 and 1941.
Posted by ___ Restless Native at 10:41 AM