You are never going to kill storytelling 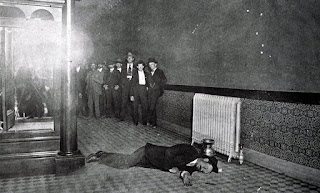 J.K. Rowling is given credit for the idea that "No story lives unless someone wants to listen. And the stories we love best, do live in us forever." But I personally hold that a lot of fine stories live because somebody who doesn't want to listen — got killed because of it.

So goes the tale of Cripple Creek millionaire mine owner Sam Strong.
Papers all over the country, from the New York Times to the papers in San Francisco, reported his death.

The Millionaire Owner Meets His Fate In a Drunken Quarrel in a Gambling House.

Cripple Creek , Colorado, Aug . 22 . —Sam Strong, the millionaire mine owner, and one of the best known characters in Cripple Creek, was shot and killed this morning in a quarrel with Grant Crumley. Sam Strong at 6 o' clock this morning entered a gambling house and met Crumley. He became abusive over an old trouble and finally pulled his gun and shot. The bullet missed the mark, and other men jumped in between the two, while Crumley stepping behind the bar, picked up a gun, took aim at Strong and fired, blowing nearly the whole top of his head off. The incident caused the wildest sensation in the gold camp.

A not-so-flattering obituary in the same paper, also on the front page, followed immediately.

Colorado Springs , Aug . 22 . —Sam Strong, the millionaire mine owner, killed this morning in a gambling house brawl at Cripple Creek, lived here for some time. He was not a cultured man and his personality made him few friends. Despite his wealth he was practically ostracized socially. Wealth spoiled all the good traits in the man. He cut his old friends, developed into a typical Shylock, loaned money at heart-breaking rates of interest, was notorious as a betrayer of women and when he married for the second time last year, a Miss Lewis sued him for breach of promise and secured a judgment, the largest verdict ever returned for a similar case in this county. He was sued by many women and was a born rake. He was tried a few months ago for blowing up his own mine, but was acquitted.

For a story-telling event sponsored by the Victor Lowell Thomas Museum, the museum noted Sam Strong's death was a favorite.

"The most famous story about the Strong Mine has to do with its founder. The mine’s 1890’s owner, Sam Strong, was killed in an argument in the Newport Saloon in Cripple
Creek in 1901, his shooting the result of an argument over gambling. As a result of the incident, the mayor at the time outlawed guns and gambling in Cripple Creek.
In the August 23 issue of the Colorado Springs Evening Mail, Mayor Crane ran a decree on the front page. He publicly denounced Strong and all other gamblers for the common practice of carrying concealed weapons, saying: ‘I believe that in a community so well governed as Cripple Creek, where warrants are worth 100 cents on the dollar, any person who carries a gun or other dangerous weapon concealed on his person is either a coward, a bully or an outlaw.’ Crane ordered that all gambling houses in Cripple Creek be closed and that ‘all persons carrying concealed weapons quit said practice.’"

Other stories about Sam Strong had made headlines before. In the San Francisco Call, April 14, 1900:

Strong Must Pay Heavy Damages for Breach of Promise. Special Dispatch to The Call.

COLORADO SPRINGS. Colo., April 13.— The jury In the breach of promise case of Nellie Lewis vs. Sam Strong this afternoon returned a verdict In favor of the plaintiff for $30,000. The trial was sensational in many respects. The defendant is a millionaire, having made a fortune in Cripple Creek, principally in the famous Strong mine. The parties to the action met in June, when the plaintiff was 15 years of age. The relations began between the two six months later, continuing to January last, when the defendant married Regina Neville, a belle of the mining camp of Altman.

Local historian Jan MacKell linked Strong's death to troubles for the gambling industry at the time and reported this way in her book "Cripple Creek District: Last of the Colorado's Gold Booms, in a chapter titled "Eleven Years of Gambling (1991 to 2002)."

"The death of Sam Strong, gold mining magnate, seemed to punctuate gambling problems in 1901. Sam had ran up a gambling tab of $2,500 at the Newport, which he paid by check. The next day, Strong stopped the check, claiming the roulette wheel was fixed. A week later, Strong settled with Grant Crumley for $200. All seemed well until one night when Sam and some of his friends ambled in the Newport. Strong was very drunk and jeered at Crumley, even when he managed to win $140. At the bar, there was brief exchange of words, before Strong suddenly withdrew a revolver. He shouted at Crumley to take his hands from his pocket. Crumley reacted by pulling a saw-off shotgun from under the bar. In the next moment, Strong lay on the floor, in a puddle of blood slowly spreading around his head. He died a few hours later, and Crumley was acquitted of the killing. Grant Crumley's action put one cap in Sam Strong and another cap on first gambling era of Cripple Creek."

Academics like Benjamin McKie Rastall got in to the act with "The Labor History of the Cripple Creek District: A Study in Industrial Evolution

"It has been generally believed in some quarters that the blowing up of the Strong mine was accomplished by Mr. Sam Strong himself, in order to prevent the property from being worked, and in this manner to break the valuable lease, which would revert to himself. This is exactly what did happen, and Messrs, Lennox and Giddings, the lessees of the mine, later brought suit for heavy damages against Mr. Strong on the above charge. The admission by prominent union men that the mine was really destroyed by a party of miners now settles the question beyond any doubt, and clears Mr. Strong of all suspicion."

And even Labor experts  got in the act. Following is an account by Emma Langdon, in her book "The Cripple Creek Strike," of that reported exoneration.

"The following morning a number of men quietly entered the building of the Strong mine and ordered Sam McDonald, Charles Robinson and Jack Vaughn to come out. They declined to do so and retreated down the shaft. Dynamite was then deliberately placed in the boiler inside the shaft house, and with an electric battery, the same was exploded, demolishing the building together with the its valuable machinery. Great interest in the fate of Sam McDonald, and the two men with him in the shaft of the destroyed Strong mine was felt, but twenty-six hours after the calamity, voices were heard in an old shaft connected with the main shaft of the mine by drift, and the imprisoned miners were taken out. After getting washed and something to eat, they were taken to what was known as 'Bull Hill stronghold.' Charles Robinson suffered considerably as a result of the terrible experience, but none of the others suffered to any extent. Who was responsible for the destruction of the Strong mine is still a mystery?"

Photograph posed days after the death of Strong, by Strong supporters in the Newport.  From the Ray Drake collection at the Cripple Creek District Museum.