No level ground for imaginative newspaper in mining camp 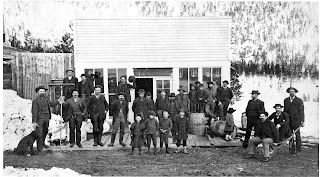 silver bust spell the end for the Pine Cone

Imaginative newspaperman George S. Irwin and his printer devil business partner George Root arrived pretty close to the beginnings of White Pine, Colorado. It proved to be a pretty precarious existence right from the start, with avalanche "runs" and aggressive pack rats.
But the two carried on and survived and published for more than 10 years in the harsh surroundings in the remote Gunnison County camp.
That is, until the Silver Panic and Crash of 1893, and simultaneously Irwin was sentenced to 15 months in prison, for what he called a minor infraction of postal laws related to mailing the paper.
"By 1883, White Pine had a post office, the White Pine Cone newspaper, daily stages arriving from Monarch and Sargents and 1,000 miners in the camp and nearby hills. The Horseshoe Saloon, twenty-five by fifty feet and containing a pool table and five round tables for gambling, was the center of attraction in the camp," wrote Duane Vandenbusche, in "Colorado Central Magazine," in 2011.
As far as the aggressive pack rats, the two Georges, (Irwin and Root) explained their troubles accordingly:
The two newspaper men spent their first night in the lean-to adjoining the log cabin where the paper would be printed.
"The rats were big, noisy and bold and banging a shoe on the floor only made them more active.  So Root grabbed his Wesson .44 carbine from the bunk post and handed it to Irwin below him. The editor hearing a crunching sound and blazed away, and "no more was heard save for strong men struggling for the word."
In the morning Root pried up some floor boards and found a cache of objects belonging to the previous occupants, among them trunk straps, neckties, dish rags, slippers, forks and spoons."
"When the Pine Cone printed its last edition, after 10 years of lively existence, the furry thieves had made away with all they could carry or drag except the type lice."
The location of White Pine was not desirable, Vandenbusche wrote.
George Root declared: “There was scarcely enough level ground in the camp for more than six or seven town lots. The back yards of the lots on the west side of Main Street were from 50 to 75 feet higher than at street level, while the rear of those on the east side were from ten to 40 feet lower in the front.” Main Street was three quarters of a mile long and “not quite as crooked as a dog’s hind leg.” Huge boulders dotted Main Street, and stages had to run a slalom course to avoid them. George Root summed up White Pine’s location: “As the mines could not be brought any closer, the town was started as near the mines as practicable.”
But survival was possible.
"White Pine suffered an agonizing famine this week," the paper noted one particularly rough week. "For two whole days there was not a drop of whiskey in town. Nothing but a liberal supply of peach  brandy and bottled beer prevented a panic."
Of avalanches, the spring of 1884 was particularly bad.
"At Woodstock, over the mountain from White Pine,  one of these slides swept away a little railroad station at the time when people were waiting for the train. Carried away and smothered were fourteen, including Mr. Doyle and his four children. In addition to the station, many other buildings were destroyed, boarding house, telegraph shack, and many cabins.  The same day, another avalanche hit the workings of the Magna Charta tunnel and swept away most of the related buildings. The Cone, of course carried the story:
"The wind blew a veritable hurricane, driving the snow with hurricane force. Tom Farell and  Terry Hughes, employees of the Magna Charta went to work as usual. They were in the blacksmith shop when about eight o'clock, a huge snow slide came down Granite Mountain with a deafening roar, striking the shop with fearful impact. Mr. Hughes was driven though a partition and then carried out the end of the shop and thrown about fifty feet down the mountain side. Fortunately, he landed in a bed of soft snow and soon extricated himself. Seeing nothing of Farell, he gave the alarm and some twenty or more men hurried to the scene of the accident and began searching for him.  A few minutes later they found him imprisoned under the roof of the shop, but the combined efforts of the men to raise the roof were futile until it was broken into pieces. Farell was unconscious when taken out but recovered after time. Examination showed, other than a few bruises, he was alright."
The rescue party had just returned to town, when a second, larger slide went through and wiped away the remaining buildings of Magna Charta mining operation. It was rebuilt, but suffered another devastating slide about 15 years later, which did not spare several unlucky miners or any of the buildings.
The Pine Cone, of course, had been swept away by that time as well, and could no longer report on it.

Photo info: Residents of White Pine pose in front of the Turner and Macy Store in 1884. Photo courtesy of the Amon Carter Museum, Fort Worth, Texas.