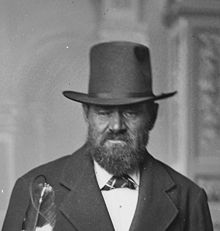 
Pardon our French, and other language

We all survive in our own way. And language and place names do, too.
In Northern Colorado, for example, pardon our French.
Trappers built cabins along the Cache la Poudre River as early as 1828, making it the first Euro-American settlement in Larimer County. The French moniker refers to an incident in the early part of the 19th Century when French trappers, reportedly caught by a snowstorm, were forced to bury part of their gunpowder along the banks of the river.
The early arrivals of European-descent found Apache, Pawnee, and Comanche. But those tribes were pushed out and replaced by Arapaho and Cheyenne in the Spanish-era mostly.  Kiowa tribes visited the southeast portion of the state an the Shoshone frequented the north-west portion.
French, French Canadians, Spanish-French, and French Americans by way of St. Louis, have a lot to do with the naming conventions in Northern Colorado, as a result.
In the 1860s, only about 35,000 people lived in Colorado, as counted by the census then, but they were a diverse lot.
Antoine Janis, often designated the first permanent white settler north of the Arkansas River (Janis was born in Missouri to a French father and a mulatto mother) and earlier traveled with his father on trading caravans from Missouri to the Green River. In 1836 he may have traveled with his father on a caravan along the Cache la Poudre River valley in present-day Larimer County. It is possible and often suggested, (but not established) that the river obtained its name during this trip.
In 1844 he journeyed west on his own, working with brother Nicholas as a scout and interpreter out of Fort Laramie, where he married First Elk Woman of the Oglala Sioux tribe. While returning from a trip to Mexico, he again passed through present-day Colorado along the Poudre Valley, arriving at the spot where the Poudre emerges from the foothills. He reportedly was particularly taken by the valley, calling it "the loveliest spot on earth."
At the time, the area was not open to settlement but was part of the hunting territory of the Arapaho and Cheyenne. Janis hedged his bets. He staked a squatter's claim on the river bottom just west of present-day Laporte, in June, 1844.
The opening up of the western Nebraska Territory to homesteading allowed Janis to return to the area 1858 with his claim filed. He was accompanied by a party of other homesteaders from Fort Laramie, including John B. Provost, his brothers Francis and Nicholas Janis, Antoine LeBeau, Tood Randall, E.W. Raymond, B. Goodman, Laroque Bosquet (aka: Rock Bush) and Oliver Morrisette.
Janis settled in the area with approximately 150 lodges of Arapaho, who accompanied him to the spot. With the other members of his party, he founded the town of Colona, which later became La Porte, the first non-native community in Larimer County.
"La Porte is French for 'The Gate,' and was given because its site is the natural gateway to the area lying to the northwest. The two words have been combined into one in recent years," says George R. Eichler in "Colorado Place Names."
The following year he erected a small wooden house on the south side of Poudre River where he kept a grocery and saloon. He continued to live in the area until 1878, when a general order from the federal government forced his wife to move to the Pine Ridge Indian Reservation in South Dakota. Janis sold his cabin and accompanied his wife to the reservation, where he died in 1890.
The winter of 1849 brought, Kit Carson and his company of trappers set up camp on Cache la Poudre. Carson had been there before, guiding Lt. John C. Fremont' Party up the Poudre, and connecting with Oregan Trail, in the spring of 1843. 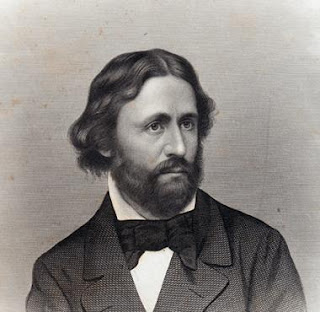 "From Fort St. Vrain, he (Fremont,) and his guides Kit Carson and Thomas Fitzpatrick, searched the Front Ranges for a useful pass over the Divide. In this search, Fremont was disappointed, as others had been before and many would be later. Splitting his party, Fremont then sent Fitzpatrick and some of the men on to Fort Laramie with the supplies. Carson and Fremont led the rest of the men up the 60-mile canyon of the Cache La Poudre River, up along the Eastern base of the Medicine Bow Range, until they struck the Oregon Trail," writes Carl Ubbelohde, Maxine Benson, and Duane A. Smith in "A Colorado History."
When Carson returned in 1849, nothing had changed much. 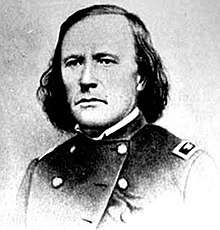 Originally labeled Colona, between fifty and sixty log dwellings were built on the banks of the Cache la Poudre River in the valley, and in November 1861, the territorial legislature assigned La Porte county seat status. The next year Colona changed its name to La Porte, and became main office of the Mountain Division of the Overland Trail Stage Route.
First settled by French-Canadian fur trappers and mountain men,  it was considered gateway to all the mountainous region lying north of the South Platte River and extending from the Plains to the Continental Divide.
The first post office opened, and a stage stop was built on the Overland Trail. A station was erected right along the river, very near where the present Overland Trail crosses the river.  The stage fare from Denver to LaPorte was $20.00. The first bridge over the Cache la Poudre River was built as a toll bridge, and during the rush to California, numerous wagons and stage coaches crossed it every day. The toll charged ranged from $.50 to $8.00, according different records.
In 1864, the bridge was washed away by a flood, and a ferry was rigged up and used for several years until the county built another bridge.
LaPorte thrived as a supply center for emigrants. Four saloons, a brewery, a butcher shop, two blacksmith shops, a general store and a hotel made La Porte the most important settlement north of Denver, housing the Stage Station, the County Court House, the military, Indians, and trappers.
In 1862, Camp Collins was established by the U.S. Army along the river to protect the stage line from attack by Native Americans. Also that same year, the La Porte Townsite Company claimed 1,280 acres of land for the town. In 1863 the 13th Kansas volunteer infantry was stationed to Laporte, acting as escort for the Overland Stage on the trail to Virginia Dale. During the flood of 1864, the army camp was covered with water, and the soldiers had to suddenly flee to higher ground. In August of that year, Col. William Oliver Collins, commanding officer of Fort Laramie (between present-day Lingle and Guernsey in Wyoming,) on an inspection tour, and decided to move the Camp Collins army camp to Fort Collins, down river about six miles. 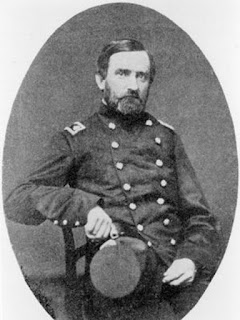