Holding Pattern: Not in the jailhouse now, but headed there 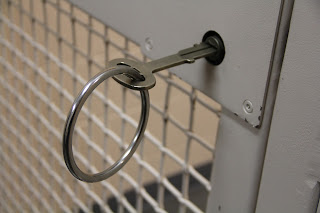 Still, it is the large key turning the lock

By Rob Carrigan, robcarrigan1@gmail.com
Things are not going well. You been having a bad evening all night, and it looks like it is headed from bad, to worse.
Three walls of yellow-tinged cinder block, and a fourth wall of heavy-gauge mesh screening with a locked metal metal door surrounds you. There was single big steel key on four-inch key ring that turned the latch that closed door, and locked it without fanfare. The key is now hanging over there on the wall. More yellow-tinge on the reinforced ceiling and a three-inch drain in the middle of the floor in front of you as you look down. A narrow formica-covered, fake woodgrain bench is on the north side of this on the nine foot by nine foot space. Not comfortable, but it wouldn’t be advised for you to try and get comfortable, anyway. You won’t be here long. You can’t stay any longer than six hours, anyway.
You are not in the jailhouse now, but you are headed there.
One of two holding cells in the Monument Police station is your current locale, and you are most-likely headed to the El Paso County Jail. You came in the east entrance downstairs of the Monument Police Building, in one side of the Town Hall, and you were probably in handcuffs, when placed in “Holding Cell 1, or 2.”
The arresting officer will do his, or her paperwork a few feet from you, at the desk there. Within the comfort of their own reports and computer. Always a bunch of paperwork, when you are arrested. Then they will take you somewhere else for fingerprinting, photographing, more paperwork, booking and lockup.
Officers from Monument Police, El Paso County Sheriff’s Office, Palmer Lake Police, Colorado State Patrol and others, might have decided to use the temporary holding cell, says Commander Steve Burk, from Monument Police Department. And the arresting officers are responsible for you during your short stay. A sworn person is required to be present when anyone is in the holding cell. That person makes sure you do not become seriously ill, violent, suicidal, or present other problematic behavior.
Sometimes, a lot is going on, and both cells are full, with a possible waiting line. Other times, no one visits the holding cells for weeks, says Burk.
It is one the few locations in northern El Paso County, where such a facility is available. And only became available in the last few years when the new town hall was built. Before, much of work had to be completed in parked squad car, or at booking into the jail.
Gone, of course, are the days of Otis Campbell in Mayberry, having a key to the front door of the courthouse and the cell keys are hung on a nail near the cells (presumably, to accommodate Otis).
“It is interesting, however,” says Burk. “How it is still the large key turning the lock, to secure the door.” 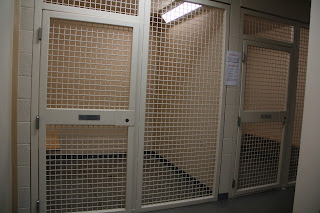 
Photos by Rob Carrigan
Posted by ___ Restless Native at 9:35 AM