Of fairness, community and communication 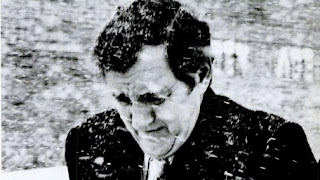 There has been trouble before

I don't even like talking about the upcoming election, but there has been trouble, of course, in the past.

The whistle-stops were uneventful until his noon arrival in Miami, where Yippie activist Jerry Rubin and another man heckled and interrupted him repeatedly. The Senator at one point tried to answer Rubin's charges that he had once been a hawk on (Vietnam) war measures. He acknowledged that he had made a mistake, as did many other senators in those times, but Rubin did not let him finish. "Muskie ultimately wound up scolding Rubin and fellow heckler Peter Sheridan, who had boarded the train in West Palm Beach with press credentials apparently obtained from Rolling Stone's Washington correspondent, Dr. Hunter S. Thompson." ___ Miami Herald, 2/20/72

Before 1900, press fairness was not even an issue.
As late as the 1930s, the partisan roots of most newspapers were very much in evidence. And who would expect anything but a largely partisan press, writes Lawrence T. McGill, director of research at the the time for the Freedom Forum, a nonpartisan, international foundation dedicated to free press, free speech, and free spirit for all people.
"By most accounts, such professional values as fairness, objectivity and balance did not become press priorities until the early part of the 20th century," McGill contends.
He points to a number of significant events in first part of the last century as signs of change.
• The first journalism degree program was established at the University of Illinois in 1904, and the University of Missouri in 1908.
• National Press Club was founded in 1908 and Sigma Delta Chi (now known as the society of Professional Journalists) in 1909.
• The fact-base reporting style of the Associated Press after 1900 was exerting a powerful standardizing influence on its member papers.
• The American Society of Newspaper Editors published journalistic code of ethics first in 1923.
So fairness and objectivity is a fairly new and much-debated endeavor for newspapers and media in general.

Both the Washington Star and Women's Wear Daily reported essentially the same tale: A genuinely savage person had boarded the train in West Palm Beach, using a fraudulent press pass, then ran amok in the lounge car -- getting in "several fist-fights" and finally "heckling the Senator unmercifully" when the train pulled into Miami and Muskie went out on the caboose platform to deliver what was supposed to have been the climactic speech of his triumphant whistle-stop tour.
It was at this point -- according to press reports both published and otherwise -- that my alleged friend, calling himself "Peter Sheridan," cranked up his act to a level that caused Senator Muskie to "cut short his remarks."
When the "Sunshine Special" pulled into the station at Miami, "Sheridan" reeled off the train and took a position on the tracks just below Muskie's caboose platform, where he spent the next half hour causing the Senator a hellish amount of grief -- along with Jerry Rubin, who also showed up at the station to ask Muskie what had caused him to change his mind about supporting the War in Vietnam. Rubin had been in Miami for several weeks, making frequent appearances on local TV to warn that "Ten Thousand naked hippies" would be among those attending the Democratic National Convention at Miami Beach in July. "We will march to the Convention Center," he announced, "but there will be no violence -- at least not by us." To questions regarding his presence in Florida, Rubin said he "decided to move down here, because of the climate," and that he was also registered to vote in Florida -- as a Republican. Contrary to the rancid suspicions of the Muskie staff people, Sheridan didn't even recognize Rubin and I hadn't seen him since the Counter Inaugural Ball which ran opposite Nixon's inauguration in 1969. When Rubin showed up at the train station that Saturday afternoon to hassle Muskie, the Senator from Maine was apparently the only person in the crowd (except Sheridan) who didn't know who he was. His first response to Rubin's heckling was, "Shut up, young man -- I'm talking."
"You're not a damn bit different from Nixon," Rubin shouted back . . .
. . . And it was at this point, according to compiled press reports and a first-hand account by Monte Chitty of the University of Florida Alligator, that Muskie seemed to lose his balance and fall back from the rail. . . .
__ Hunter S. Thompson account of same event of what happened on the Sunshine Express.

As a community newspaper person, I, of course, have my own ideas on what we should strive for here in our own papers.
"The editor of a community newspaper cannot avoid being a community relations specialist. He or she, must listen to, deal with, put up with endure all kinds of confrontations," wrote longtime newspaper executive J. Tom Graham in "A Checklist for a Community Newspaper." He talked about from his own experience in the newspaper business over seven decades.
"He will take abuse when he does not deserve it, so he must be long suffering by nature. He must not take issues in the community personally or become so tied into one cause that he fails to do a complete and fair job."
The important thing to remember in this business, is that communication and community is not that far apart in the dictionary. We need to talk to each other. We need to listen. We need to take responsibility for each others' training. If we do, the community gets a newspaper that accurately and fairly represents them. And as journalists, we get to continue practicing the craft.