Roy Robinson, and his wife Carol Lee purchased the the Ute Pass Courier in the summer of 1966, shortly after the untimely passing of its founder, Agnes Schupp. Roy later went on to a long career in newspapers and printing, and was managing seven newspapers and four radio stations in Graham, Texas, for Media-News Group, when I tracked him down in 2003.

I have seen him several times since, and my understanding is that he finally has retired. He was inducted into the Texas Newspaper Hall of Fame in ceremonies in 2012.
"Courier presswork was immediately moved from Castle Rock to Cripple Creek, where the Courier shared a two-pages-at-a-time Chief 22 offset press with the Cripple Creek Gold Rush, published then by Roy's father, B.G. Robinson. It had a hand-fed Liberty folder that finished the production process.
"Upon acquisition of the Courier, I vowed to never print fewer than eight pages or fewer than 1,000 copies per issue. Those goals, ambitious in a community of 700 residents and with few prospective advertisers, were never missed. Generous 'filler' content was often necessary and abundant stacks of leftover copies were common some weeks throughout the next year," Roy told me in an email in 2003.
"The Courier's first-ever color edition came about two years later when Congress authorized legislation establishing the Florissant National Monument. Preservation of the unique fossil beds has been a longtime goal for Teller County and warranted a banner headline in red ink when the act cleared congressional review."
According to Robinson, the page count and pressrun continued to mirror Woodland Park's growth, and eventually the sheet-fed press in Cripple Creek could no longer handle the volume.
"When word came that a Fort Collins publishing firm had a two-unit web printing press for sale, it wasn't long before that press was loaded into a horse trailer and moved to the Gold Rush building in Cripple Creek. The modern web press took its place immediately beside a turn-of-the-century flatbed letter press that had clanked out the Gold Rush until it was retired in 1965 in favor of the Chief 22 offset press," Robinson said.
"It was a revolutionary move for the Courier and the Gold Rush to print and fold eight pages simultaneously. It also represented the introduction of sections for both newspapers."
When Robinsons sold the papers in 1978, production was moved to Littleton, and later, Castle Rock, under corporate ownership.
"Consolidated group ownership of community newspapers will become more widespread in the years ahead," suggested Robinson at the time. "Although regretted by some, group ownership is the only economically viable option to a newspaper ceasing publication, he said.
"The hometown newspaper, regardless of ownership, will remain a cornerstone in a successful community's foundation." 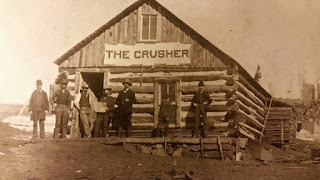