Nobody has time for that anymore 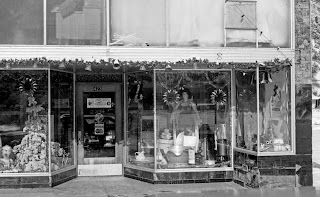 Hear that lonesome whippoorwill?
He sounds too blue to fly.
The midnight train is whining low,
I'm so lonesome I could cry.
___ Hank Williams, 1942

Nobody has time for their memories anymore. We seldom ride trains, buses, or even planes — for long, thoughtful trips into the nights and mornings of our past.
But I try to remember — because she can't.
Back in the fall of 1978, just a little before 8 a.m., any of six days of a week, Fifth and Main Street, meet me at the side door, Taylor Hardware, Dolores, Colo. Let's take a walk.
Jiggle the big ring of keys in the heavy wood frame door with thick plate glass in the center, beveled all the way around, glazed tight and solid nearly 90 years prior.
Inside the light switches are low, near the hardwood floor up front, and then in ceiling as we pass on either side, past the gun case, the cabinet hardware, t-hinges, gate hooks, flat bastards. Cant hook handles there, sanding belts under the stairs, and different-sized dowel rods in a rotating swivel display.
After the stairs, the high shelf carried items overhead. Calf feeder buckets, Gerry cans and pump sprayers, Number 10 galvanized pail (sometimes still half full of water from last night's rain)...
The building seemed to grow taller as you moved deeper into it. The leaky skylight illuminated the balcony filled with furniture, and the nail counter tucked in below.  Live plants, needing water at least every other day, draped over the balcony banisters.
But then the building tightened again, as you moved back from the side door, with its crossbar strips and glove counter. Linoleum, in eight-foot rolls, stood a sentinels against the back wall on the front room guarding the double doors, each latched at the top with a spring-loaded tooth, that could be released with the chain that hung from it.
On the other side of the doors,  was the tiny, 30s-era bathroom, with sink outside, two exterior hose bibs underneath (at times with a garden hose attached) and appropriately enough, the wooden bins with the bathroom parts. A steel case with closet bolts, and toilet rods, along with bins of Johnny rings and tank balls. Off to the left, as you looked toward the bathroom, and then the nail counter, was the big wooden rotary cabinet filled with fender washers, and expansion anchors, hitch pins and cotter keys, twirling with abandon.
The ancient scale rested on the corner of the nail counter, complete with inspection stickers from the '20s and beyond, certifying it accurate, and want books slipped between it and the excess weights.
Behind that, was a cave of sorts. Surrounded by dog collars, and horse tack, the coffee percolator topped a steel cabinet covered in contact paper. An aluminum tray, with seven or eight coffee mugs that were washed every day in the small sink, accompanied it like a best friend.
The second stair well (a ladder really) went through the balcony floor there. Customers, and some employees, drinking coffee — liked to lean on it as they told wild tales of times past.
In the back, thought the double doors, the plumbing counter and the high wall of bins of elbows and tees, bell reducers and bushings. Somebody was constantly standing there sharpening their knife on the well-worn oil stone, swapping lies with Merton Taylor at the check-in stand, or the micro-fiche machine.
Further back, the rope machine, and the paint equipment, and open area to receive shipments from Amarillo Hardware, or NW, or wherever —  delivered at the sliding door in the far corner.
And that was just the main building.
Sometimes, late at night or early morning, on a chilly bus (or if I'm lucky enough to ride a train), or in the stuffy space of a cramped plane, I drift back through that building, take a walk back through time, and space, and memory.
She doesn't remember much. And generally, nobody has time for that anymore.

Rob Carrigan, please consider publishing a compilation of your nostalgic writings about Dolores and related memories. I would purchase copies, and I think I'm not the only one!