Followed around before you get there. 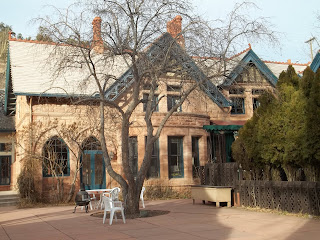 By August, 1871, the railroad was completed to the new town of Colorado Springs

Some people seem to follow you around – before you get there.
Almost everywhere I have ended up, I discover Dr. William Abraham Bell was there before me, a little more than 100 years prior.
Child of Ireland, born to English parents, photographer, physician, best-selling author, businessman, developer and founder of towns in southern Colorado such as Manitou Springs, Durango, and Colorado Springs, Bell showed early and often. And as a major early presence in Woodland Park, Monument, Palmer Lake and Pueblo, he always gave most of the credit to his friend, General William J. Palmer.
"The rapid development of the United States is largely due to the few men of exceptional ability who have opened up the country by various systems of railroads. They may be called empire builders ...
With these General William J. Palmer ranks as the developer of southern Colorado by means of construction of the Denver and Rio Grande Railroad and much of Mexico by founding the Mexican National Railway...," Bell told employees of the Denver and Rio Grande Railroad at a dinner at Union Station in 1920.
By the time he married Cara Scovell in early1872, William A. Bell could show his new bride, and other guests visiting Colorado, such notable local stops as Palmer's Glen Eyrie, Garden of the Gods, Sacred Springs at Manitou, his sheep farm in Monument and soon-to-be-developed ice operations at Palmer Lake.

Truth be known, Bell, himself, turned out to be a pretty handy sidekick.
"My earliest association with General Palmer dates from the Kansas Pacific Survey of 1867 (later part Union Pacific), an account of which is given in a book of travels called "New Tracks in North America," which I published in England in 1869... On that survey we shared the same tent for many months and over the camp fire we discussed his plans."
It was Bell that carried out many of the details of empire building around Palmer's railroads, including  the non-conventional selection of gauge.
"The question of gauge was the first thing to be determined," wrote Bell of his friend Palmer. "The day after his wedding, on November 8th, 1870, he started for England. I met him in London and there consulted the great engineer Fowler  and General Richard Strachery, R.E., who had introduced narrow gauge railroads into India with the metro gauge. We visited the Fastiniog Railway, a two-foot gauge road in Wales, and we finally adopted a three-foot gauge for the new enterprise."
Rails were ordered and shipped from Wales, 30 pounds to the yard and grading started.
"By August, 1871, the railroad was completed to the new town of Colorado Springs, which had in the meantime been located and laid out on broad lines, but which had but one finished house on the townsite when the railroad reached it," he wrote.
"Early the following year, the track was finished to Pueblo and the Canon City coal fields, hand in hand with the railroad came the opening up and development of the country through which it was to pass."
On one hand there was Gen. Palmer, on the other Dr. William A. Bell – their train always arriving before we do.


Photo information: Briarhurst, complete with schoolroom, conservatory, cloister and a library with a special alcove to display the oil painting by Thomas Moran "Mount of the Holy Cross." Now, it is a restaurant, and event center. It is reported that Cara Bell and Dr. William Bell encouraged a band Utes to camp on the grounds when visiting Garden of the Gods. Rebuilt, beginning in 1887, after a fire in the winter of 1886.