Big rock at the river, mermaid in the sun 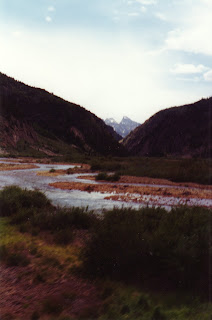 The pickup bed of the Ford Courier overflowed with humanity as it ginned up the hill after clattering over  rickety steel Fourth Street bridge. The cab also -- all but bursting at the seems -- allowed only just enough room for its over-sized driver to dodge potholes in the once-graveled road. Fortunately, not far down the path, they came to a stop.
Steep, wooded embankment below, more Ponderosa pine and oak brush above ... and the dull roar of the river as background.
"I was trying to tell my mermaid story," I told the driver. He seemed vaguely interested, as he opened  the cab door, and the core compliment of baseball team piled out of back and front, and over the sides of the wee vehicle.
"But you nearly killed me a few times, the way you pitched up and down through those road pocks," I said.
"I thought the springs were going to give," he worried.
The seven or eight of us scrambled down the narrow trail through gamble oak, leaves and loose dry dust, toward the roar.
River was up from yesterday, and muddy. The trail led out to the bank and then to two large rocks, partially buried in embankment,  partially jutting out into the stream, but with well-worn paths carrying you out on to the top of them.
A couple of jokers rushed right down through the brush, over the path to the largest rock and out to its point in the current. They barely took the time to drop their towels there, dived right off the point into the roiling course, shoes and all.
They dived straight upriver, but as soon as they surfaced, the current carried them back past the point, and into the eddy between the two large rocks.
"Cold ... man." The first chattered, and climbed back up onto the big rock and into the warm sun. The rest of us unloaded gear, and prepared ourselves, lizard-like, by warming before dropping into the cold drink. You can take it a lot easier, its seems, after baking your bones in the sun awhile.
Besides, I needed to finish my story.
"Yea, I walked down Seventh last night about 6 p.m.," I continued. "Came through between those two Cottonwoods over there, (pointing directly across the river) and there she was. Laying right there in the sun on the warm river rocks," I said.
"Her long hair shining in the evening sun, the bare brown skin of her legs, and arms, and back."
Now, of course, I had their interest.
"She didn't notice me at first, but I didn't want her to think I was creeping on her, so I made quite a bit of noise."
"What was she wearing?" asked one of the more fashion-concious of my friends.
"I don't know," Not to sound too eager, but  in order to maintain my reputation as a careful observer, filled in the details. "Cutoff jeans, I think, and a too small a flannel shirt, tied in the center, high above her waist. Both were wet... looked like she had been in the water."
"Did you talk to her?" asked another.
"Of course," I said, though it was common knowledge that I was not always a silver-tounged devil in the presence of the fairer sex.
"Surprised me," I told her. "Wasn't expecting anyone here this time of day."
"Here almost every night," she said. "The rocks are warm if the sun has been out all day, and I like the way in shines on the surface downriver. And I can see fish in the deep water this time of day."
"What do want to see fish for?" I asked.
She leaned to pick up something in the rounded rock, and I couldn't help but notice bronzed cleavage in the process. "I spear them," she said, and produced this three-pronged widget-looking thing.
"Is that legal?" I asked, once again, falling into the familiar trap of not knowing exactly what to say when face-to-face with a beautiful woman.
"I don't know, but if it isn't?" her eyes teased. "Are you going to turn me in?"
Needless to say, by this time, I am completely off guard.
Just thinking of it again, my awkwardness and lack of comfort pushed me to the edge of the rock before my story was finished.
Embarrassed, I threw a perfect pocket-knife dive into the rushing current.
"What happened?" I heard them ask as I hit the water.
"What about the mermaid?"
I realized right then, that more than one of them would show up at the river this evening, over there between the two Cottonwoods, where the rounded rocks warm all day in the sun.
###