Legend of the Hollywood 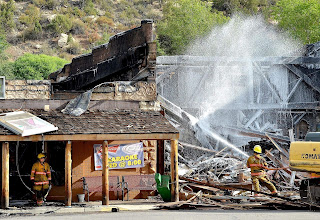 Don’t know which side I came down on that night.  For the forces of evil, or good. But that is how it all got started, I guess.  Yes, the legend of the Hollywood.


Been in a lot of bars my friend, pursuit has taken up much of my life.
Many a swinging door should’ve passed. Some trouble saying ‘no.’  Just ask my wife.
There is the Buckhorn and Bee, Wolf Hotel, St. George, Antlers and Zekes.
Millwood, Diamond Bell, Wynkoops, Town Pump, The Snort, and  Sally’s Peak.
Been in the “Face Bar,” Bull and Bear, Green Frog, The Mayor, and Humpy’s.
Last Dollar Inn, Rick’s, Stumbling Monks, Toronado, Bomb Shelter,  and Gilly’s.
Bangers,  Ebeneezer‘s, Hofbrau,  Holy Grale, Rustic, Purple Pig and McSorley’s.
But down near the river and back off of 145, was the start of them all, my friends.
The first cut is the deepest, that's where this old boy began his wayward life.

If you looked down street then, Taylors,  Akin Merc and old Tade’s.
Dropped off stacks at the long counter, rounded edges, big mirror, where history was made.
The Rose brothers were in there that day, and Johnson, and old Blue.
Watermelon, and Don Wallace, Manuel, Roelicker, One of the Grubs, and Shag, too.
Spec Dillard, Tommy Rowell,  John McEwen and a Randall (off to the side shootin’ pool.)
Juke box in corner still blarin’ as Ellis and the band not quite ready, sipped coffee from a cup.
Celebration in town tonight, if all goes as planned, Dolores was likely to liquor it up.
It was Escalante Day I assume, and all-class reunion, I am afraid.

The place was full of loggers, a cowboy and miner or two, folks from the forest, and those never worked.
Dam builders, hippies, tourists too, several housewives (who, because of a husband) had been irked.
Out in the street an arm wrestling contest was just about to get underway.
Chain saws buzzin’, fire trucks yelped, and those that could still see, watched the parade.
Football players recalled moments of fame, I was on the same team, but remember just a jerk.

And then in the bar, all hell broke loose. Music playing, sounded great --  part of neighborhood.
Took my first drink, laser Jim Beam, Wild Turkey or some concoction -- paralyzed, right where I stood.
“Please allow me to introduce myself,” said the fellow nearby. “I’m  man of wealth and fame.”
And I, the last devil in Dolores, had sympathy for him. In fact, I recognized him by his first name.
Don’t know which side I came down on that night.  For the forces of evil, or good.
But that is how it all got started, I guess.  Yes, the legend of the Hollywood.
###
Hollywood Bar "the morning after." Photo by Sam Green, Cortez Journal.

What a sad day it was when the Old Hollywood Bar went down.Folks from all over the nation knew of the Hollywood Bar and they all cried when it burned.A lot of good memories and people made it into our life.

I am sure that Dodd Harris was there in that mix. But he might have been bartending at the old Shadow Mountain or the Del Rio Bar. I think it was called "Bar Row".