Water, water, everywhere and not a drop to drink. 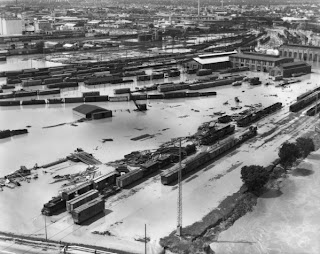 A wall of water, described by some as nearly 16-feet high crashed and roared down the debris-strewn South Platte River steam bed on the evening on June 16, 1965. Reports had it taking out, or at least damaging, every bridge along that watershed, all the way the Kansas border and beyond.
Saturated by previous rains, the normally sparse steam flow of East and West Plum Creek, south of Castle Rock, became a raging torrent with microburst rainfall, tornados, and a ripping and roaring water drop, near the Palmer Lake area.
The Weather and Climate Assessment Science Program evaluation estimates, “The rains began to fall on the eastern foothills of Colorado on June 13. During June 13-16, weak frontal systems were present in the Colorado region. Warm, moist air flowed into the state from the south, producing convective storms. Many of these storms were severe and produced large hail and funnel clouds. The storms on June 14-15 occurred in the Greeley-Sterling area, in the Bijou Creek basin southwest of Deer Trail, and in the Colorado Springs area. The rains were generally heavy with reports of damaging hail in some areas, especially around Colorado Springs, on June 14. An unofficial report of 12 inches fell during the night of June 14-15 at a ranch near Rockport, about 36 miles northeast of Fort Collins. A cold front settled into the region and became a stationary front by the morning of June 15.
“By June 16 rainfall amounts increased immensely over much of eastern and southeastern Colorado and the storms turned more violent. The orographic effects of the divide between Colorado Springs and Limon and the divide extending from a point between Trinidad and Raton, New Mexico, generally eastward to the Panhandle of Oklahoma were quite pronounced during the storms of June 16 and 17. Unofficial rain amounts for June 16 in the South Platte basin were unprecedented. Heavy rains, unofficially 5” to 10”, also occurred to the south near Trinidad and a reported 3” to 7” fell in the vicinity of Cripple Creek. The torrential rains continued late into June 17. Rainfall amounts of over 5 inches for the 24-hour period ending in the late afternoon of June 17 were common in the storm area.”
“Residents of Littleton and metropolitan Denver had little reason to anticipate a flood on Monday afternoon, June 16. Although a rare tornado and severe thunderstorms had hit Loveland a couple of days before, the forecast was for scattered thundershowers typical for a summer afternoon. In fact, it was not even local precipitation which fueled the flood, but a violent cloudburst many miles south near Castle Rock,” according to the Colorado Division of Emergency Management in “Historical Colorado Events.”
“Police were able to give people in Littleton several hours warning, so they could be evacuated. The first local casualty was the Columbine Country Club southwest of town, whose golf course and luxury homes were devastated. Overland Park golf course north of town suffered a similar fate. In between, Centennial Race Track, which was within days of opening its racing season, had most of its track and stable areas inundated. A massive rescue operation by owners, trainers and jockeys saved some 140 horses. The City's water supply, which consisted mainly of a series of wells along the river, was nearly destroyed. A network of fire hoses run from the nearest Denver outlets provided emergency water for months.”
The Division of Emergency Management describes the toll taken.
“All told, it was estimated that the damage came to some $540 million, plus 28 persons lost their lives. The state could count itself fortunate that so few citizens were killed in one of Colorado's worst natural disasters because it began in broad daylight and few people were caught without some notice. On the positive side, much of the eastern plains received relief from a three-year drought and farmers made the most of the situation. Plans were quickly finalized and construction began on the Chatfield Dam, being completed in 1972. And with a massive cleanup required all along the South Platte, municipalities began to turn the valley into a beautiful greenbelt which today belies its garbage dump past. The river finally got its respect.”
According to the City of Littleton’s web site, “As the flood continued north, it was more than just water bashing the countryside -- it now included all the old cars and refrigerators and both old and new debris. This battering ram carried away or destroyed 26 bridges, including every one from Littleton north to the Colfax viaduct. Both Public Service Company power plants along the river were shut down, and emergency circuits became waterlogged and shorted out. As the flood continued north, other tributaries added their weight, Sand Creek and Clear Creek, and further north the Bijou and Little Beaver and the Poudre River. The communities of Sterling, Fort Morgan and Brush became isolated as the waters spread out over a quarter-million acres of farmland.” 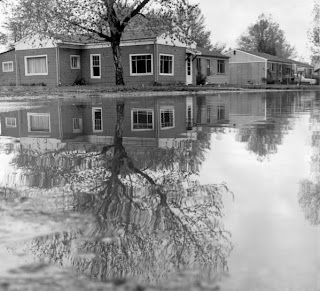